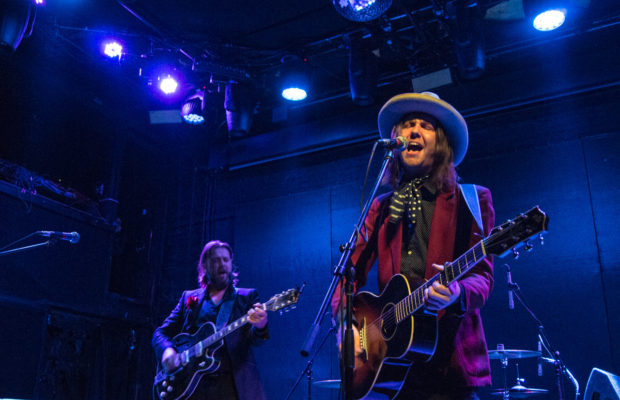 On Wednesday night, Aaron Lee Tasjan took the stage at Bowery Ballroom opening for Lydia Loveless to a crowd of longtime fans and friends. Tasjan, who is now living down in East Nashville, called NYC home for quite a few years — playing residencies up the street at Rockwood Music Hall and singing at on-the-fly gatherings at the 11th St Bar— New York will always be a part of him and a part of his story to tell in songwriting along with tales of where he originates, which is Ohio. I first saw Tasjan back in 2011, and I’ve seen him many times since— his skills have only gotten better with time. Tasjan played “Little Movies,” “Success,” “12 Bar Blues,” along with some others off of Silver Tears, his new album out now through New West Records, who are based out of Nashville.  Tasjan was accompanied by Brian Wright during his set who sang back-up vocals and played the guitar. Be sure to check him out online and if he plays a city near you, see him live. You will not regret it.

Closing out the night was Loveless, whose passion and energy could easily be seen and heard when watching her live performance. Fans of hers could be seen singing along with her throughout the night in the crowd. She’s someone that if she has a live show in the area, you’re going to want to be there, and I intend to be there if she tours NYC again.