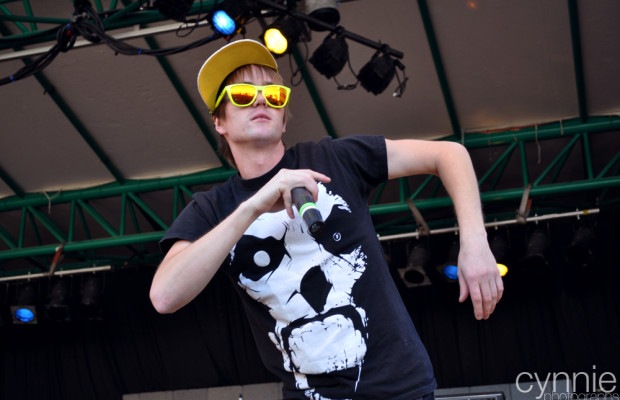 During the summer of each year, Edmonton, Alberta holds a summer festival called Capital Ex (previously Klondike Days). This ten day extravagansa contains entertainment for people of all ages, including many thrilling rides, great tasting, interesting food, and many great performances.

On July 26, 2010, Stereos, Down With Webster, and guest Jhevon Paris played the Telus Stage. With three interesting performances, that evening was filled with dancing, jumping, and just having a good time in the summer surrounded by friends. Each of the sets were unique in their own way and seemed to draw the crowd in. These three energetic acts seemed to get the crowd up and going, moving a lot.

If you’re ever in Edmonton in the summer, be sure to check out Capital Ex, it’s an experience you won’t forget.

Starting off with a quick speech isn’t something you see from most musicians these days, but it worked for Jhevon Paris. Getting the crowd pumped up, he started off with an upbeat song getting everyone off the feet in a second. Moving around a lot is a quality of Paris, showing a lot of energy. Getting the crowd involved is also a great aspect of Jhevon Paris’ live performance, getting them to chant “I don’t give a f*ck, I’m just here to party!” With great tunes and a catchy beat, Jhevon Paris started the night off fantastically.

If I had to use one word to describe Down With Webster’s live performance, it would be energetic. Jumping out on stage, and starting off with as much energy as they ended with, Down With Webster surely knows how to put on a good live show and get the crowd pumped, and moving. Starting off with Time To Win, the intro to the song had the crowd anticipating the big break when the band came on, and started performing. This was done perfectly as screams erupted from most of the crowd and the band burst out into dancing and having a party on stage.

Down With Webster is known for their energetic sound and the diverse of genres in the songs. With all this combined means a fun, lively show. The crowd added to the energy of the show with crowd surfing, dancing, and even throwing their undergarments on stage.

Overall, Down With Webster put a fantastic live performance having and energetic crowd, and members on stage.

Even before Stereos appeared on the stage, many fans were already cheering and screaming for Stereos. This local edmonton band has grown musically in the past two years, and endured fast blooming success.

As the band walked on stage, screams and squeals erupted from the crowd. They started off with the first song off their album, “Addicted” which got the crowd lively in a second. Filled with a great performance Stereos really brought the crowd closer to who they are as a band and kept the energy above the bar.

Being a band from Edmonton, Stereos has made it in the past year, being on a full US tour with Brokencyde, Jeffree Star, and Blood On The Dance Floor, also many Canadian tours. It seems that each time Stereos plays in Edmonton, the crowd gets bigger each time.

Although the band’s performance is swell I must say that the amount of autotune that is put on Pat K’s voice can get irritating. It is obvious that he can sing very well without it and personally, I think as a live performance, autotune ruins it a bit.

I give Stereos for making it big out of Edmonton, since it is a overlooked city. I give them the credit for not forgetting their hometown and always coming back to play a nothing less of and energetic, fun show.