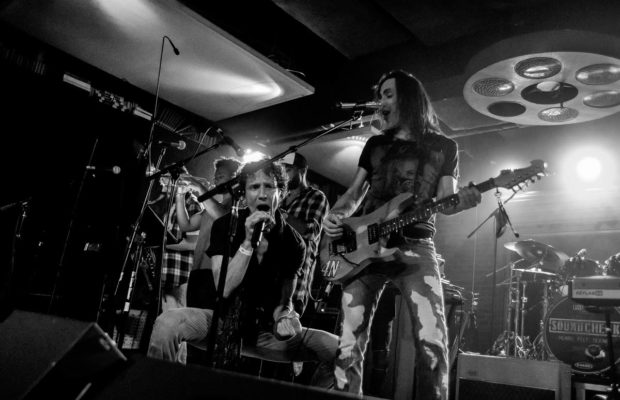 Lucky Strike Live in West Hollywood is known for their Wednesday night Soundcheck Live jams attended by various music notables on any given week and with the occasional guest curator that brings their own set list and special guests. Changing it up from a weekly to a once a month event, they want to pack more of a punch. If Wednesday night was any indication of what kind of a punch, they’re going for the knockout.

Curated by guitarist Nuno Bettencourt of Extreme and Mourning Widows, he brought with him fellow Extreme bandmate and singer Gary Cherone for his first Lucky appearance. Starting with the harmonizing country, rock band Honey River, the evening flowed into the heavy metal band Edge of Paradise before turning it over to the resident Lucky Strike Live band and guests.  With the audience thoroughly warmed up, Nuno took the stage for his curated set by providing vocals to Bush’s “Machinehead” and “Movin’ Out” by Billy Joel. A jumping rendition of Rare Earth’s “I Just Want To Celebrate” saw Bettencourt bringing out the congas and Cherone. An entire horn section came out next to accompany on Queen’s “Staying Power” before Nuno went solo again for some soulful crooning of Nick Cave and the Bad Seed’s “God Is In The House”. Cherone and a full choir joined the stage for Queen’s “Bohemian Rhapsody” before finishing out the set with some dueling guitars between Bettencourt and Steve Fekete on “Tie Your Mother Down”.

For those not fortunate enough to visit a Soundcheck Live event visit their Facebook page for video of some amazing performances. In the meantime… enjoy our pics from the night.