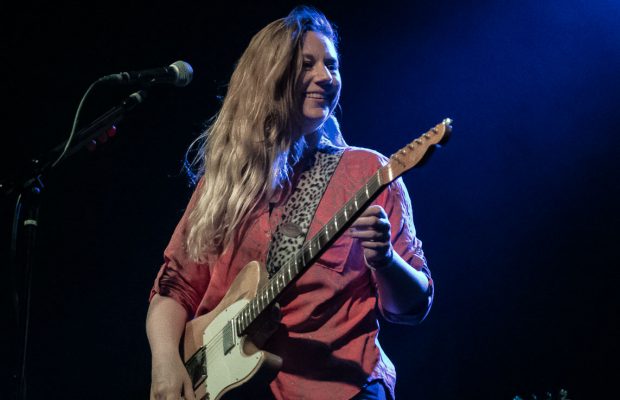 British blues guitar sensation Joanne Shaw Taylor, who is currently on tour in support of her latest album Reckless Heart,  made a stop recently in Louisville, KY to a packed house.  The venue was set up with several rows of chairs in front of the stage this evening, with plenty of room throughout the venue for those who wanted to stand and dance to her groove-inspired and bluesy tunes.  The album is her 6th studio album, one she describes a the most fun album she’s ever made, a mood that’s apparent this evening judging by the amount of fun she had on stage.  Although she is a blues guitarist, she considers herself a soul singer and it’s easy to hear the influence that the soul greats such as Aretha Franklin, Tina Turner and Mavis Staples had on her throughout her life.  She performed an incredible set, with a nice variety of songs for her multi-album catalog.  Her powerful vocals and awe-inspiring guitar solos this evening elicited plenty of cheers from the crowd and had the crowd on their feet, dancing, singing along and cheering her on.  She chatted a bit with the crowd throughout her set, but for most of the evening she let the music do the talking.  She is an incredible live performer and gave the crowd a fun and exciting show that I imagine left them anxiously awaiting her next visit.  Maryland indie/soul/rock band Pressing Strings opened the show.