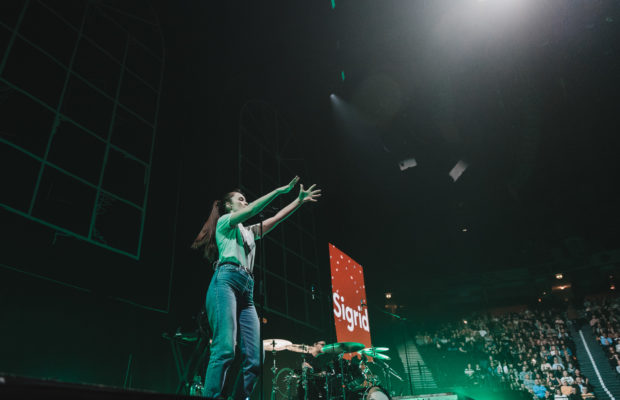 For the second time in the space of a year I had the utmost pleasure to photograph the wonderful Norweigan pop superstar Sigrid who opened up the Manchester Arena in support of George Ezra. Still fresh off the release of her debut album ‘Sucker Punch’ earlier on this month the singer was incredibly well received by the mancunian audience as she began the night with a bang.

Opening with the track ‘Suckerpunch’ it was the perfect energetic song to match the singer’s personality as she bounced around the stage with glee, she would go on to play more of her well known songs and those from the album such as Dont Killy My Vibe, Business Dinners, Dont Feel Like Crying and ending off her set with the infamous hit ‘Strangers’. Sigrid is on a high right now with her recent releases and constantly producing music that places high in the charts and rightly so, I predict that she will be selling arenas like the Manchester Arena on her own within a year or so. Only today has she announced a string of North American shows in October/November ahead of her headlining Europe show which consits of two Manchester dates (due to pheneomonal demand of the first night selling out) so here’s to hoping we’ll be able to catch up with her at one of those shows in the future!