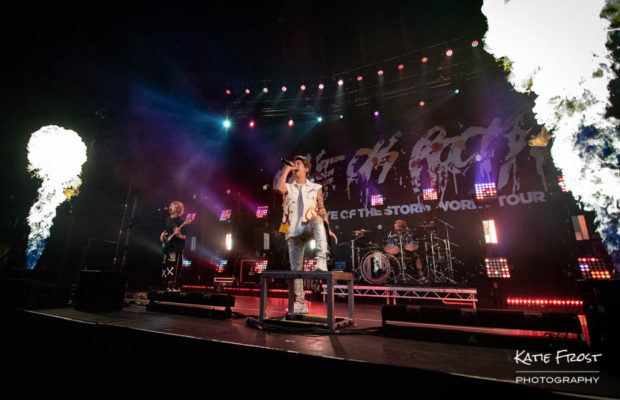 Last Friday night I headed to the Grade II listed Roundhouse in Camden to see Japanese rock band One Ok Rock play one of only two UK shows in support of their latest album Eye Of The Storm, which was released back in February. The band first came to my attention around 2014 when they were touring with one of my favourite Aussie bands  Tonight Alive, and I have been keen to see one of their live shows ever since.

At 8pm London-based indie-pop band Anteros took to the stage. This was my first time seeing the band, and I really enjoyed their sound. Their catchy indie / alt-pop reminded me of Canadian duo Dear Rouge and their highly bop-able set went down well with the crowd. Vocalist Laura shimmered in a sparkly outfit and barely kept still throughout the band’s set, and her bandmates were equally as animated. Anteros played a great set featuring tracks from their debut album When We Land (released in March) including “Breakfast”.

At around 9:15pm, One Ok Rock took to the stage, and were met with a wall of cheers and screams as they launched straight into “Push Back” from their latest album Eye Of The Storm, which was accompanied by plumes of flames. Vocalist Taka sings in both Japanese and English, and is one of the most energetic performers I have seen in a long time – forever leaping on and off the raised plinth at the front of the stage, and jumping around between his band-mates Toru on guitar and Ryota on bass. Drummer Tomoya was also full of energy, despite being restricted to sitting behind his kit.

The Japanese four-piece have been going for over ten years and have a very passionate fan-base. The screams from the fans were like nothing I had heard before, and the pure joy on the faces of the crowd was very heartwarming. Everyone was having a lovely time and it was a real pleasure to be able to document the show. The band played a huge 16-track set featuring not only tracks from Eye Of The Storm but also some fan-favourites from their impressive back-catalogue, including “Clock Strikes” from Jinsei x Boko = (2013), “Mighty Long Fall” from 35XXXV (2015), and “We Are” from Ambitions (2017). They ended their set with “Wasted Nights” which had the whole crowd singing along and finished with a huge eruption of white confetti filling the room.

One Ok Rock are a fantastic live band and I highly recommend that you check them out if they come to a city near you in the future.

One Ok Rock Set List:
Push Back
We Are
Taking Off
Unforgettable
Clock Strikes
Head High
Take What You Want
Stand Out Fit In
(Instrumental)
Giants
I Was King
Change
The Beginning
Jaded
Mighty Long Fall
—
Wasted Nights