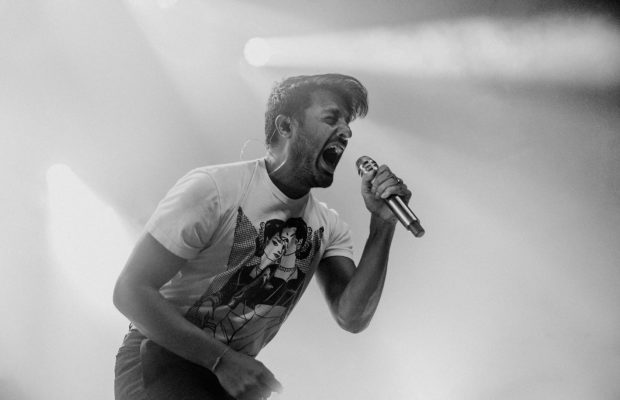 Young the Giant with Lights

After releasing their most recent studio album, Mirror Master, last month, indie rock powerhouses Young The Giant played the second of two shows at Brooklyn Steel. The weather outside was way beyond frightful — it was hands down the coldest day of the season thus far. With temperatures in the low 30’s and wind blowing, I was counting on this night to warm me up inside and believe me, it did!

There are few times that I get to a concert and the venue is largely filled before the opening band has even graced the stage. However, Brooklyn really turned out for Canadian pop-singer, Lights. Lights was the very first artist that I fell in love with when I was a freshman in high school and the first real concert I ever attended (let’s be real, all of us went to the Best of Both Worlds Stadium tour in 2008 but it doesn’t count). I remember seeing Lights at a tiny venue in my hometown of Philadelphia in 2010. I dragged my mom to the show and I had the time of my life. Since then, I’ve grown up with Lights and supported her through all four of her albums that she has released; so you can imagine how much of a treat Wednesday night’s show was for me! Lights graced the stage and opened her 45 minute set with “From All Sides” off her most recent record Skin & Earth. It was clear to me that many people in the crowd were not familiar with Lights’ music, but as soon as the beat kicked in fans started grooving and dancing — even the most stoic of fans tossed in a little head bop. What really got the crowd going was Lights’ impeccable cover of The Cardigans’ “Love Me”. A large majority of her set consisted of songs from Skin & Earth, with a little peppering in of Little Machines when she played “Running With The Boys”. Not before long, it was time for Lights’ set to conclude and I wasn’t ready for it to end. After teaching the crowd some minor lyrics for participation, Lights’ closed out her set with her hit single “Giants”. Though Lights explained that this show was her last New York show of the year, I am counting down the days until I am able to see her again!

I remember discovering Young The Giant through a mixtape that my sister made me on my pink iPod nano (I’m giving away my age now) when I was in high school. I think that every kid who was a wannabe “hipster” had “Apartment” and “My Body” on their playlists — and rightly so because those songs slap! It wasn’t until September of 2017 that I was able to see Young The Giant for the first time and the wait was well worth it. A year later and you bet that I was shaking in the photo pit from excitement, ready to see the guys again! By 9pm, the lights dimmed and the show was ready to start. The band took the stage and immediately jumped into the title track off their last record Mirror Master. The band’s lengthy setlist consisted of songs that catered to fans both new and old including my personal favorite “Apartment”. At the midpoint of the show, Young The Giant mixed things up and performed two songs in their “in the open” style. The beautiful acoustic renditions of these songs allowed for lead vocalist Sameer Gadhia’s voice to shine through. The two songs were followed by a killer cover of Radiohead’s “No Surprises”.

The night was coming to an end, but not before the band played a four song encore, which included hit songs “Silvertongue” and “My Body”. Young the Giant will always be one of my top favorite bands to see perform live. Their lighting and stage set up mixed with their all of their sheer talents combined amounts to a powerful and beautifully amazing performance. Their shows are a recipe for a night to remember, for sure!