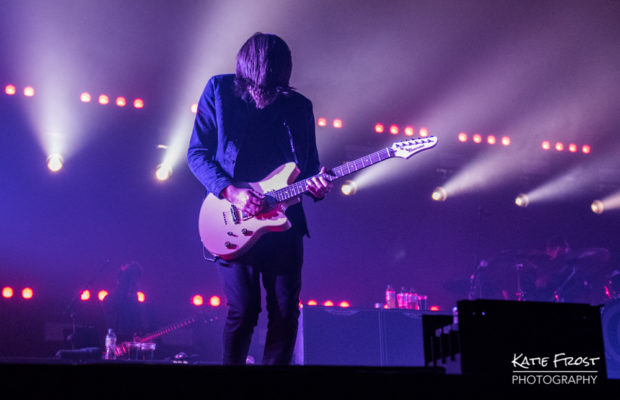 You Me At Six / Tonight Alive / Black Foxxes

English rock band You Me At Six have been on an eleven-date tour of the UK promoting their fifth studio album ‘Night People’. The last stop of the tour was at the glorious Alexandra Palace in London. The building was opened in 1873 and is a mighty-fine location for a music and entertainment venue, offering stunning panoramic views of London. Whilst the show wasn’t sold out, the 10,400-capacity venue was still heaving with excited music fans, some of which had been following the whole tour.

First to hit the stage were three-piece rock band Black Foxxes from Exeter, bringing their heart-wrenching rock to the North London stage. They played a great set of emotional and immersive tracks and although there were only three people on the stage they had no trouble creating a sound that filled the huge room. Their unique brand of angst-rock seemed to go down well with the growing crowd.

Main support for this tour were five-piece pop-punk band Tonight Alive from Sydney, Australia, who brought their “conscious rock” to the eager crowd. A firm favourite of mine, this band’s shows are always full of energy and they never fail to get the whole crowd involved in their set. The band played a mixture of tracks from their rockier 2013 release ‘The Other Side’, and their mellower 2016 album ‘Limitless’. They also played their new single ‘World Away’, which signals a new chapter for the band (having recently signed to Hopeless Records / UNFD) and provides the perfect bridge between their last two albums. Tonight Alive always put on a brilliantly engaging and uplifting live show, and to end their set vocalist Jenna McDougall led the crowd in a middle-finger-salute; perfectly epitomising the band’s message of personal power and strength against the pressures and expectations of modern society. The Aussies will be returning to the UK at the end of May to play Slamdunk Festival.

The atmosphere was heavy with excitement as headliners You Me At Six stormed onto the stage, opening their set with the title track from their latest album ‘Night People’. The five lads from Surrey played a banging nineteen-song set featuring a great mix of songs, new and old, spanning their five albums. The lighting and special effects that accompanied the show was very well thought-out; with the lighting / flames / CO2 perfectly in sync with the music, creating a wonderful show. The band have been playing some huge venues on this tour, and the have certainly put a lot of effort into making the shows as spectacular as possible.

As the main part of their set came to a close, vocalist Josh Franceschi addressed the crowd with a thought-provoking speech, reminding us all that “all life it beautiful and all life is precious”, before the band played ‘Take On The World’. The crowd sang along at the top of their lungs and filled the room with the lights from thousands of phones, before being showered in sparkling confetti from some of the largest canons I have ever had to avoid in a photopit!

They went on to play a three-song encore, finishing with anthemic ‘Room To Breathe’ from their highly-acclaimed 2014 album ‘Cavalier Youth’.