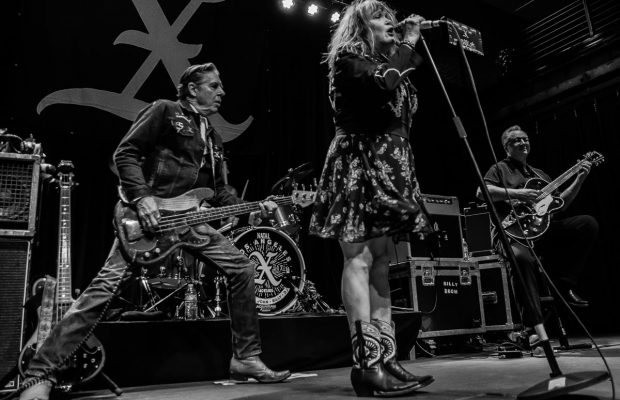 Legendary punk band X performed recently in Louisville to a packed venue of fans.  Having formed in 1977, the band has had a long and successful career, garnering a large and loyal fanbase over the past  40+ years!  The band has released 7 albums throughout their career and performed a nice selection of songs this evening from their extensive catalog.  The band took the stage to a roar of applause and started things out with “Beyond and Back”, followed by hits such as “Los Angeles”, “In This House That I Call Home”, “Your Phone’s Off The Hook, But You’re Not”, “Johnny Hit And Run Pauline” and “Nausea”.  They also performed two covers- “Breathless” by Jerry Lee Lewis and “Soul Kitchen” by The Doors.  Singer Exene Cervenka had an upbeat stage presence this evening, dancing around the stage and flipping her hair to the music as she sang while interacting often with guitarist John Doe and rhythm guitarist/saxaphonist Billy Zoom.    Although the band consists of it’s original line up of Cervenka, Doe, Zoom and drummer D.J. Bonebrake, the band has also been touring with drummer/rhythm guitarist David Packham of The Palaminos to fill in for Zoom and Bonebrake when they switch over to the saxophone and vibraphone, respectively.  The packed venue made for a fun night and a great energy, with many fans dancing and singing along to their favorite songs all evening.  The band ended their set with a two song encore, starting out with “Some Other Time” and finishing their set with “Devil Doll”.  It was a really incredible evening of music from one of punk rock’s most iconic bands.  Austin based folk duo Folk Uke opened the show with a wickedly funny set, with ukulele player Cathy Guthrie (daughter of Arlo Guthrie) and acoustic guitarist Amy Nelson (daughter of Willie Nelson) performing their beautiful harmonies over surprisingly edgy lyrics.  They reminded me quite a bit of Garfunkel and Oats with their witty and hilarious lyrics, as well as cutting up with each other on stage throughout their set, and had the crowd laughing and ready for the evening ahead.