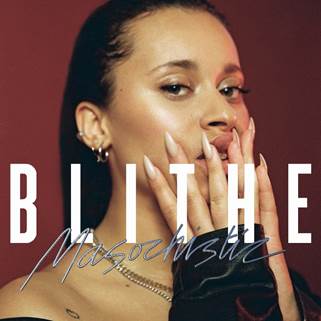 Rising UK pop artist Blithe has created pop perfection in the shape of her new single “Masochistic”.  The track follows her debut EP Don’t Blink, which has amassed millions of Spotify streams since its release in April.  Fresh off a performance on the BBC Introducing Stage at The Great Escape Festival, Blithe has released the pulsating & snappy “Masochistic”, a depressingly relatable song about a five-year relationship that turned toxic.  The upbeat anthem details the gaslighting, arguments and weird push and pull of love gone wrong- something we can all relate to.  “I wrote masochistic when I was in a really bad relationship,” says Blithe. “Things were really hard every day and it made the good parts seem amazing.  I started to convince myself that I wanted the drama and the humiliation because it kept things exciting and I had to turn it into a positive to endure it. Everything I sing about in the song is true.  I really did move into my ex’s place when we broke up. The entire relationship was backwards.”  The track follows the artists interactive video, “Don‘t Blink” taken from her debut EP of the same name.  Similar to themes experienced in Black Mirror, the video watches the viewer as well, using first-of-its-kind facial recognition technology that restarts the video whenever the viewer blinks.
A naturally gifted performer, Blithe spent her early years performing whenever and wherever she could, armed with a restless energy and unwavering drive to make it.  Despite achieving good grades, Blithe found herself being undermined by teachers, described as a ‘bad influence’ and voted as ‘most likely to end up in the papers’ by her peers.  Brimming with ambition, Blithe moved to London alone at age 16, determined to bring her dreams to live.  She regularly found herself sofa surfing and sneaking into parties, not to meet the right people, but for the free booze and mini burgers in order to keep herself afloat.  Blithe even found herself stripping for 10 days in order to fund her first trip to LA at 19.  Self-aware, sexually confident and independently minded, Blithe is every inch the modern popstar.  She has a second EP due for release as well as more live shows in the pipeline.  You can follow Blithe and stay up-to-date on all upcoming news, music and tour dates via the following links.
Facebook | Instagram | Twitter | Spotify | SoundCloud | iTunes/Apple Music | YouTube | Deezer | Google Play