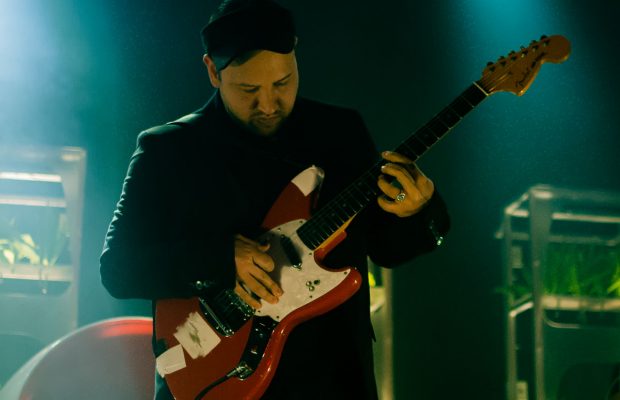 Portland based psychedelic rock band Unknown Mortal Orchestra recently made a stop in Louisville, KY.  The band has been touring in support of their latest album IC-O1 Hanoi, an instrumental album that originated from the sessions for their previous album Sex and Food.  The band came out onto the stage this evening to a packed venue of fans who were singing along and dancing from the first note.  With plants placed at the back of the stage on shelves, potted plants on the stage and dim, moody lighting, the band had a beautiful stage set up for the evening.  Starting out with “From The Sun”, they performed a set list that spanned their multi-album catalog, including “Ffunny Ffrends”, “So Good At Being In Trouble”, “Necessary Evil” and “American Guilt”.  Singer/guitarist Ruban Nielson is a dynamic frontman, sitting on the edge of the stage at one point and going out into the crowd a couple of times during his set, much to his fan’s delight.  He definitely made sure the crowd was engaged and was having a great time, which gave the venue a fun and positive energy throughout the evening.  The crowd was having a great time, which allowed the band and the audience to feed off of each other’s energy.  Ending their set with “Multi-Love”, the band exited the stage briefly before coming back out for a two song encore.  Starting the encore off with “Hunnybee”, they had the crowd ready to keep dancing and singing for a little while longer!  The band ended the evening with their hit song “Can’t Keep Checking My Phone”, a crowd favorite judging by their excited reaction and loud cheers!  As the final song ended the band waved to the crowd and left the stage, with many fans making a beeline to the march table.  New Zealand indie-pop artist Emily Edrosa opened the show.