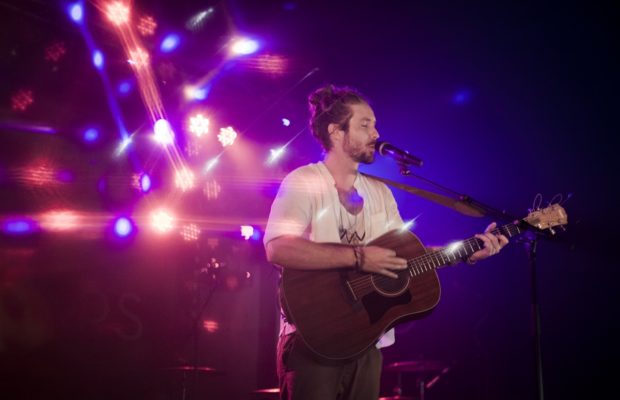 It starts with a Loop

Two years after lighting a spark at the Great Escape Festival 2015, Jeremy Loops triumphantly returned to Brighton burning a flame bright enough to sell out Concorde 2.

Brighton locals Croox warmed the crowd with a homecoming gig after accompanying Loops on the first leg of his European tour. Providing a dark infusion of electronic beats laced with smooth vocals and deep RnB grooves, Croox are definitely a band to keep an eye on, but a bravely eclectic choice of support act for an artist that can be loosely described as modern folk.

Yet as Jeremy Loops bounded through his Trading Change set it became clear that genres, boundaries and labels don’t hold much weight with the Cape Town native.

Drawing on a number of influences, Loops creates a feel good sound infused with folky harmonicas, rippling sax solos and a thick, heavy hip hop undertone. Layering songs from the debut album loop by loop created a show that was fresh and original to existing fans and first time listeners alike. The collaborative nature of the music extended to the crowd as they were recorded and looped at several points throughout the night and even Brighton itself wove its way into the music as it came to light that the album was partially written on the shoreline. New tracks The City and The Shore captured the bittersweet reality of life on the road whilst old favorites including My Shoes, Running Away and Skinny Blues regaled tales of love all too familiar to most in the audience.

Loops’ playful energy dimmed during a dedication to a close friend’s recent passing and Down South, Loops’ biggest hit to date, became a moving tribute where the crowd offered support and condolences. Picking the energy back up, Loops and saxophonist Jamie Faull ripped through Only The Good Die Young, an exclusively live track featuring a sound that may well be too big for any record to handle. Aptly closing with I Wrote It For You, Loops and his band captured the power of live music to unite across the stage barriers and the show dissolved into one big jam session between friends.

Turning a sold out show into an intimate experience, there was a playful passion to the night and a real sense that this was a band that came to see the crowd as much as the crowd came to see the band. Running over time, releasing confetti balloons and rallying the crowd for a final time, Jeremy Loops made one thing clear: the spark is a flame and the next time they visit Brighton, they’re going to need a bigger venue…