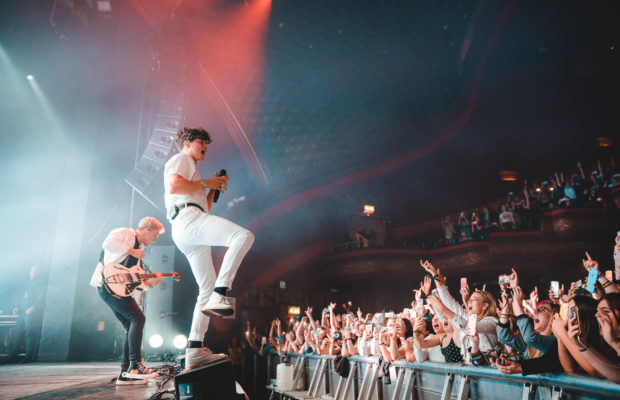 On Saturday night Manchester was treated to the return of pop boyband sensations, and arguably one of the best boybands in the UK right now ‘The Vamps’. The boys played a sold-out show at the Manchester O2 Apollo to a sea of adoring fans in attendance as part of the 2019 ëfour cornersí tour. Support came from Taylor Grey, Power of Muzik and New Hope Club.

Now, if you havenít been to a Vamp’s concert then you know it wouldnít be a true Vamps concert without the brilliant New Hope Club boys! The Manchester crowd were in full swing as the trio hit the mancunian stage and the roof had already been blown off the Apollo before the Vamps even took stage! Opening with a clear fan favourite in ëFixedí and leading on to ëLet Me Down Slowí, Lead vocalist Blake Richardson would then go on to start an acoustic cover of Scottish singer and social media star Lewis Capaldi with their own rendition of ëSomeone you lovedí. The jampacked venue immediately screamed with joy and the room became alight with torches as the trio bounced off one another showcasing all of their vocal talents, it was truly a special moment to be a part of. New Hope Club are setting off on their own headlining tour across the UK in September so definitely swing on by if you have the chance!

As the clock struck 9 The Vamps hit the stage with a light show and a drop off a curtain to roaring screams from the audience and the set began with ëJust My Typeí. The show saw guitarist Connor Ball return to the band after having a hiatus due to injury on recent shows meaning the ìawesome foursomeî of Bradley Simpson, James Mcvey and Tristan Evans were back to full strength, much to the fans’ delight. As the night went on the boys would go on to play a range of their hit songs including those from the 2019 ep ìMissing youî and even throwing it back to their origins and debut album of ìMeet The Vampsî from 2014. Lead singer Bradley gave his praise to Manchester and to the devoted fans who had been waiting all day to see their idols and it was clear the boys had a lot of love for the Mancunian crowd and for all the support over the years, the night would close out with the fan favourite ìAll Nightî.