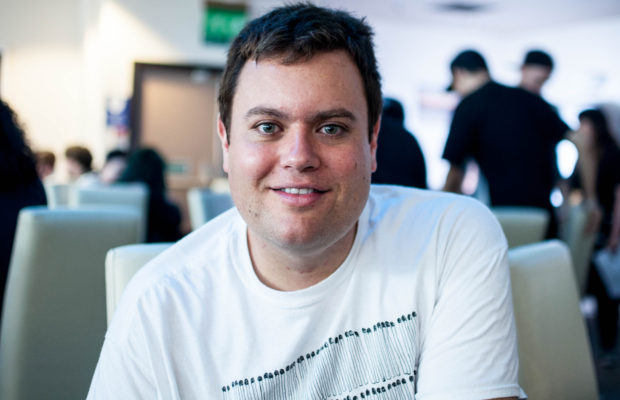 As one of the biggest names in the pop punk world today, fans were more than excited when Set Your Goals announced that they were ending their hiatus at the end of last year. With a Mutiny! ten-year anniversary tour and brand new album in the works, Set Your Goals are back and stronger than ever. Vocalist Jordan Brown recently sat down with Stitched Sound and talked about the moments in his childhood that led him to wanting to pursue a career in music.

“My parents said that they turned on the Sound of Music in a hotel room once when I was three or four years old and that I sat there and watched all of it and was obsessed with that musical for so long. I could never watch it now, I don’t even remember watching it, but I remember shortly after that, being really into Disney musicals and my dad was into Paul Simon so the 60s and 70s music that my parents listened to influenced me.

It shifted when I was nine or ten because my aunt was into Red Hot Chili Peppers, this was in like 1993 and 1994 so Nirvana had just come out and the whole grunge movement had just hit mainstream so my aunt was into everything. That is when I was into MTV and this was when MTV was strictly news and music videos. My cousin, alternatively, was into rap music so he had all of the NWA tapes that came out in 1998 and 1999 so I was listening to them in like third and fourth grade. I grew up listening to both ends of the spectrum.

What made me decide to pursue music instead of acting and theater was Blink-182 at Warped Tour 1999. I had gone to see the musical RENT on a Friday and the next day, I went and saw Blink-182 play and was equally transformed by the two so I told myself that that was what I was going to do. So, I guess, I would attribute my desire to start a pop punk band to Blink-182 and just seeing live bands play.”

Read our exclusive interview with Jordan in our latest issue that can be viewed here.