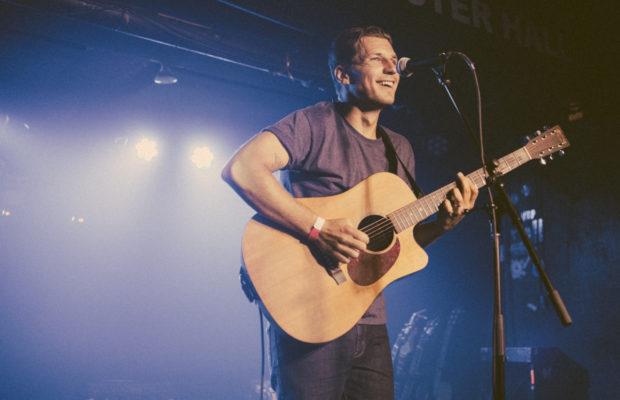 The resurgence of the emo boy has been in full swing for the past year and a half, and heading into Webster Hall tonight I’m fully prepared to relive my heyday. When I get into the venue, Vinnie Caruana, best known for being the singer of the band I Am The Avalanche, is setting up for his set. Growing up on Long Island, I’ve grown up following Caruana‘s career as a singer, so getting to see him in such an intimate setting is amazing. His songs are sad, but his on stage banter is hilarious. I always wondered how these singers could be so happy singing such sad songs, and now I know how, because they’re just fun loving guys outside of the demons they sing about. Caruana‘s set is received very well, and you can tell the crowd is loving his energy, which he has a lot of, even though it is an acoustic set. When he finishes his set, the crowd erupts in applause and woo’s.

Next up is Ace Enders, he’s been doing solo stuff for quite sometime, but most people know him best as the singer of The Early November. His set is filled with laughter, The Early November songs from all eras of the band, and newer songs he’s written on his own. Highlights of the set are definitely “I Want to Hear you Sad” and a song he had written for B.O.B. (yes, that B.O.B.) called “One Song” that some guy in the back of the crowd was shouting at him to play all evening. Ace jokes throughout the set that the “woo” noise is his favorite thing ever to hear, so people start sarcastically wooing throughout the set. For an emo concert, my cheeks are killing from laughing so hard. During “I Want to Hear you Sad” everybody is getting so into the super old The Early November jam that Ace comments that he’s never seen a mosh pit at an acoustic show before, but he feels like if he did, we’d be the place he saw that happen.  Ace closes out the set with fan-favorite, “Ever So Sweet” which has the whole crowd singing on top of their lungs, even though they’d been singing as loud as they could all night, it somehow feels louder when he plays this song. As he packs up his equipment, people come to the stage, one guy bought him a beer, two girls want photos, one girl tells Ace her best friend (who is standing behind her) is too afraid to talk to him because she’s in love. Ace handles all of this so graciously that it just helps reaffirm how much I love him as a person and an artist. And not ten minutes go by after this all happens, that the next and final act of the night starts setting up for his performance.

This whole tour is a bunch of singers of bands that were in their heyday in the early 2000’s, bands that sometimes still tour to this day, but nowhere near as often as they used to. So the last act of the night is Aaron Gillespie, who’s best known for being the drummer and singer of UnderOath and later also being the singer of the band The Almost. He comes on stage with three different guitars and a bass drum, which is pretty impressive for somebody who’s going to be playing a set all on their own. Aaron comes on stage and goes straight into playing, his energy is electric, and not something you see that often in somebody performing acoustic. The stage is vibrating from his movements, singing, playing the guitar and keeping the beat with the bass drum all at once. I’m entranced and impressed by his performance. His energy never once wavers throughout the set, and before I even fully realize it’s begun, his set has finished, that’s how entranced by his skills I was. If you have the opportunity, do not miss seeing this man play on his own.