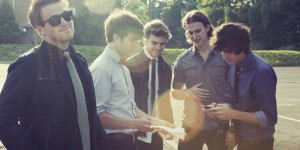 After five years of being on hiatus, Valencia just announced two shows this December. General admission for the shows begin Friday, September 30th at 12 p.m. EST. You can find the dates and a message from the band below.

“For years, our collective reason to believe was music. We all believed in the same cause — sacrificing ourselves to make others happy. Sleeping in vans and crowded hotel rooms, waking up at dawn (or not sleeping at all), failing classes to record a record. Always exchanging current pain for future joy. When the sacrifice became too much to bear, we parted ways to create our own reasons to believe and our own personal causes. We’ve been across the world and back, learned more than we ever thought we would, moved across state lines, found love, lost love, and enough time has passed.

On December 27th and 28th, after five long years away, we will be playing two shows. We’ll be returning to our adopted second home (New York City) and our hometown (Philadelphia) in support of the vinyl release of our first record, This Could be a Possibility. This is the album that changed our lives. It was a slingshot that set us on a trajectory that none of us could have imagined or predicted.

Come sing with us. Hang out with us again. Let’s feel the feelings we once felt, even if just for a night or two. Here in the future, we can all keep up with each other on social media, but there’s nothing better than hearing your voices and feeling the energy we create in a room when we come together as humans, with pain and hurt and past and present experiences. We forget about it all for a few hours, let it all go, and sing at the top of our lungs.

I’m writing this on a plane to the Pacific Northwest. One of our favorite memories of life on the road was when Max came and visited us while we were on tour with Motion City Soundtrack, Saves the Day, and Say Anything, traveling through that part of the country. He came out for a few days and rode in the van again. It was one of our favorite times. Everyone was happy, we went out at night, ate good food together, and had hilarious and classic conversations in the van. We love you all and can’t wait to see your faces in December.

See you all very soon.”