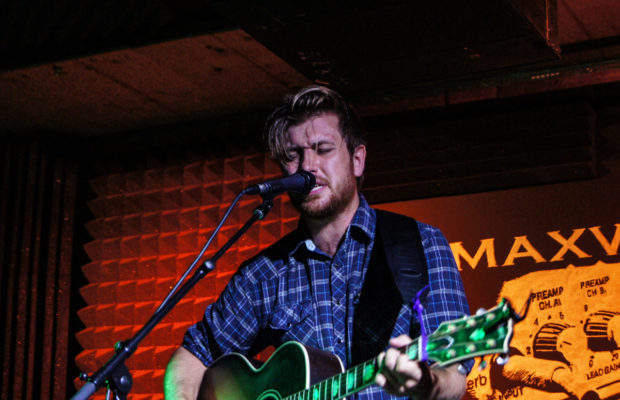 On Saturday night James Calleo and Bobby Long played at Maxwell’s, nestled in downtown Hoboken, NJ— a venue made timeless by the acts, old and new, that have graced its stage over the decades.

James Calleo, a local singer/songwriter, opened up for Long. From the first song to his last Calleo  had the crowd enamored and wanting more. His rendition of Nelly’s ‘Ride Wit Me’ had the crowd up out of their seats dancing and singing along.

Bobby Long, who hails from Brooklyn by the way of Wigan in the U.K., had the crowd’s attention with his mix of yet to be released songs, songs off his latest album Ode to Thinking, and some oldies that are always crowd favorites. Long, ended the night with a timeless, emotion filled cover of Oasis’s ‘Don’t Look Back in Anger’ that had the intimate crowd singing along to it word for word.

The first time I saw Bobby Long live was back in 2010 at a festival called Bamboozle in New Jersey. I had been following his music since 2009, but that was the first time I was finally able to see him live, and I have been a fan of his ever since. It’s hard for him not to get into your heart and head with his songwriting, undeniable finger picking guitar skills, and voice. Over the years, to me, his voice and skills have just improved, each time showing a new depth that I maybe didn’t hear or see before.

Long currently has a pledge music campaign in the works to raise funds to make his next album. Besides just having the option to get the new album, Long has put up some one-of-a-kind things such as a day-in-the-life with him or a songwriting Skype session, along with the opportunity to get a copy of his new poetry book entitled ‘Losing My Misery.’ Be sure to check out his pledge campaign if you can and show your support. You will not be disappointed with what this human being has in store in the years to come.