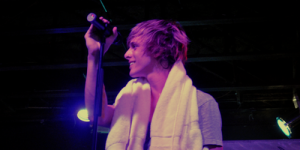 This tour is the first to feature Cady Groves full band. With her cute meaningful lyrics and well thought out sound she is sure great to see live. She did a fine job coving Katy Perry’s California Girls and Umbrella by Rihanna, putting her own Country girl spin on them. Being a opener you don’t expect much people to know your music and lyrics by heart, so Cady stated “Sing it if you know it. If you don’t know, Sing it any ways!” Which had everyone just fall in love with her.

Next was Cash Cash. There’s something really wonderful about this band that I can’t point out. Maybe it’s the well blended techno beats with rock guitars mixed with the Hip-hop like flow of lead singer Jean Paul Makhlouf, I really don’t know, but they are amazing. Imagine a giant 45 minute dance party, with the perfect lighting, the best music, and general fun. Well that’s the only way to sum up Cash Cash’s performance. Just fun with a great crowd of dancers. Their one of the rare bands that sound better live than on album.

The Audition had one of the best sets of the night. I’d never really listened to their music before that night and I have to tell you I’m obsessed. It was very entertaining watching them live. Their music is pretty soothing and they where a nice calm down from crazy techno dance party Cash Cash had brought just before.

Last we get to those four adorable blondes that we call Stereo Skyline. They came out just pumped and excited to play. Starting with their song “A Little More Us” this was just fun for the rest of the night. I was happy that they played mostly songs off they’re new album “Stuck on Repeat” but they threw in some oldies for their loving fans and had some of the funniest side gimmicks.

Stereo Skyline, are pretty much one of the last living boy bands down to the screaming girl, but it’s something that’s worth embracing.
Over all the night could be summed up like this good clean fun and cute.

View some photos below!