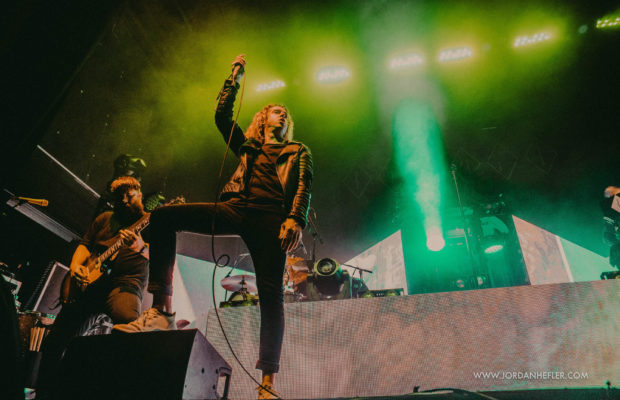 The Plot in You (not pictured)

On November 4th, fans of legendary metalcore band Underoath gathered at the Joy Theater in New Orleans to see the band’s first NOLA stop in 8 years in support of their newest album, Erase Me.

The night began with supporting acts The Plot in You, Crown the Empire, and Dance Gavin Dance- all of which had decent crowd interaction. However, nothing could prepare the packed venue for what Underoath had to bring to the table.

Playing what they’ve boasted the “longest set list in Underoath history,” the band enamored the audience for over an hour with hits from their newest album as well as albums past. Songs like “Rapture” and “ihateit” were a breath of fresh air peppered in with classic Underoath hits such as “Reinventing Your Exit” and “A Boy Brushed Red Living in Black and White.” It seemed that the new music garnered a decent reaction from the crowd, but the fans definitely got rowdiest during the nostalgic songs from They’re Only Chasing Safety and Define the Great Line. Lead singer Spencer Chamberlain urged the crowd to take a listen to Erase Me and pay attention to the lyrics- many of which have to do with him relating his past addictions and struggles to the audience.

The production of the show was that of festival quality, complete with large LED screens and tons of lighting and strobes. The lime green branding of this era of Underoath is apparent on the Erase Me album artwork, and was consistent on tour as well with the color of all the instruments matching and even the stage lighting.

Erase Me was released earlier this spring, and was highly anticipated due to it being the first album from the band in 8 years. This supporting tour was also highly anticipated and is seemingly off to an incredible start. Definitely catch Underoath while you can on this historic tour!