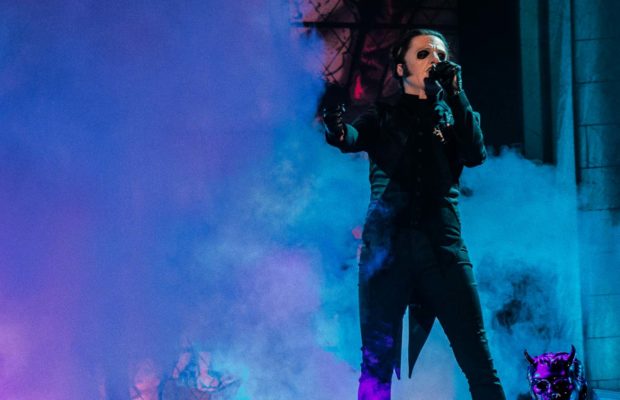 Swedish metal/rock band Ghost, who is currently in the midst of their A Pale Tour Named Death, made a stop in Louisville, KY 2 days before Halloween.  Having recently released their latest album Prequelle, the band performed to a sold out crowd of passionate fans.  The band always puts on a phenomenal live show with this evening being no exception.  For past tours, singer Tobias Forge has performed under the persona of 4 different incarnations of Papa Emeritus, a demonic anti-pope.  For this tour, the crowd was treated to a new persona-Cardinal Copia.  Throughout the evening the Cardinal was clad in either Cardinal vestments or a black tuxedo along with a prosthetic mask, black eye make up and his signature multi-colored eyes. The production on this tour is nothing short of amazing with colorful lighting that changes with the mood of each song and a set of stairs that sat at the center of the stage with two “side balconies” attached, one of which housed the drummer and a rotating cast of guitar and bass playing Ghouls, and one which housed the keyboard/tambourine playing Ghoulettes. Behind the stage were three separate and tall stained glass windows like you would see in a church.  The front of the stage contained a few strategically placed platforms, which the Ghouls and Cardinal Copia made great use of to perform directly to the crowd.  The band took the stage to a roar of applause and performed a nice mix of older and newer songs, starting things off with a song from the new album, “Ashes”.  During “Con Clavi Con Dio”, Forge came out dressed in a red cardinal robe and hat, swinging a thurible of incense like a pendulum as though he was conducting Catholic mass which elicited cheers from the crowd.  A few songs into the set the Ghouls and Ghoulettes performed the instrumental song “Miasma” with Papa Nihil (one of the incarnations of Papa Emeritus) making and appearance at the end, performing a rockin’ saxophone solo before disappearing in a cloud of smoke and causing the crowd to go wild.  The Cardinal then appeared on stage, looking dapper in a fitted white suit with coattails, black gloves, black leather shoes, a black brimmed hat with a white band around it and an elegant walking cane.  He chatted a bit with the crowd, telling them he was going to go and hide towards the back of the stage and then come back out, telling the crowd to give him a better response this time.  He then asked the crowd “How are you doing tonight?  Do you feel good?  I feel good too.  Do you know what a shuffle is?  It’s a beat and we’re going to play one for you and have you participate.  You need to be able to count to 4…start on my count”.  With 3 Ghouls sitting on the steps behind him with acoustic guitars, they proceeded to acoustically perform “Jigolo Har Megiddo” followed by the melodic track “Pro Memoria”.  The band then picked things up again with “Witch Image” and ended their first set with “Life Eternal”, after which the curtain fell for a 15 minute intermission.

As the curtain rose to the Jocelyn Pook song “Masked Ball”, the band started the second half of the show with “Spirit” followed by “From The Pinnacle To The Pit”.  A few songs later, the Cardinal chatted a bit more with the crowd asking “Are you doing ok?  I hope you aren’t too bummed that it’s Monday.  I like spending my Monday with you in Louisville.  We are going to play you a rocking tune from the new album”, launching into “Faith”, followed by “Year Zero” and “He Is”.  The Cardinal then told the crowd “It doesn’t feel like a Monday.  Let’s pretend its a Friday night!  Do you like the heavy shit here in Louisville? You didn’t come here for the ballads did you?  Are you ready to rock?”.  The band then performed “Mummy Dust”, with confetti cannons going off near the end of the song, creating a wonderfully cheerful and celebratory mood to an already fun evening!  The Cardinal continued to chat with the crowd after the song, asking “Did you like that?  Are you feeling better now?”.  He then sang a Roky Ericsson cover, “If You Have Ghosts” and then introduced each band member as Ghoul or Ghoulette to the audience.  Forge then was given a bouquet of black flowers from a female fan in the front row, thanking her for the gift.  He then told the crowd “It’s important to remember that sometimes life sucks and is not always peachy.  Sometimes life is bad but sometimes it’s good, too.  It goes up and down.  If you are currently having a bad life, as long as you have hope you will be fine.  Things always change. That’s something to always think about”.  The band ended the set with their hit song “Square Hammer”, which got the crowd on their feet and dancing!  The band then left the stage to a roar of applause and cheers, coming back out moments later for a two song encore.  The Cardinal asked the crowd “Do you really want to hear another song?  If you want me to call the Ghouls and Ghoulettes back out, you have to make it count.  To make the evening end well, you need to take things into your own hands.  Go home tonight and give yourself or someone else an orgasm.  Do you want one tonight?  Will you sing one last song with us?  Are you going to sing really loudly?  Here is a song that celebrates the female orgasm.  In the name  of Satan and from the bottom of our hearts, thank you for being here with us tonight!  Ending the set with “Monstrance Clock”, Ghost gave their fans an amazing evening of music, conversation and dancing.