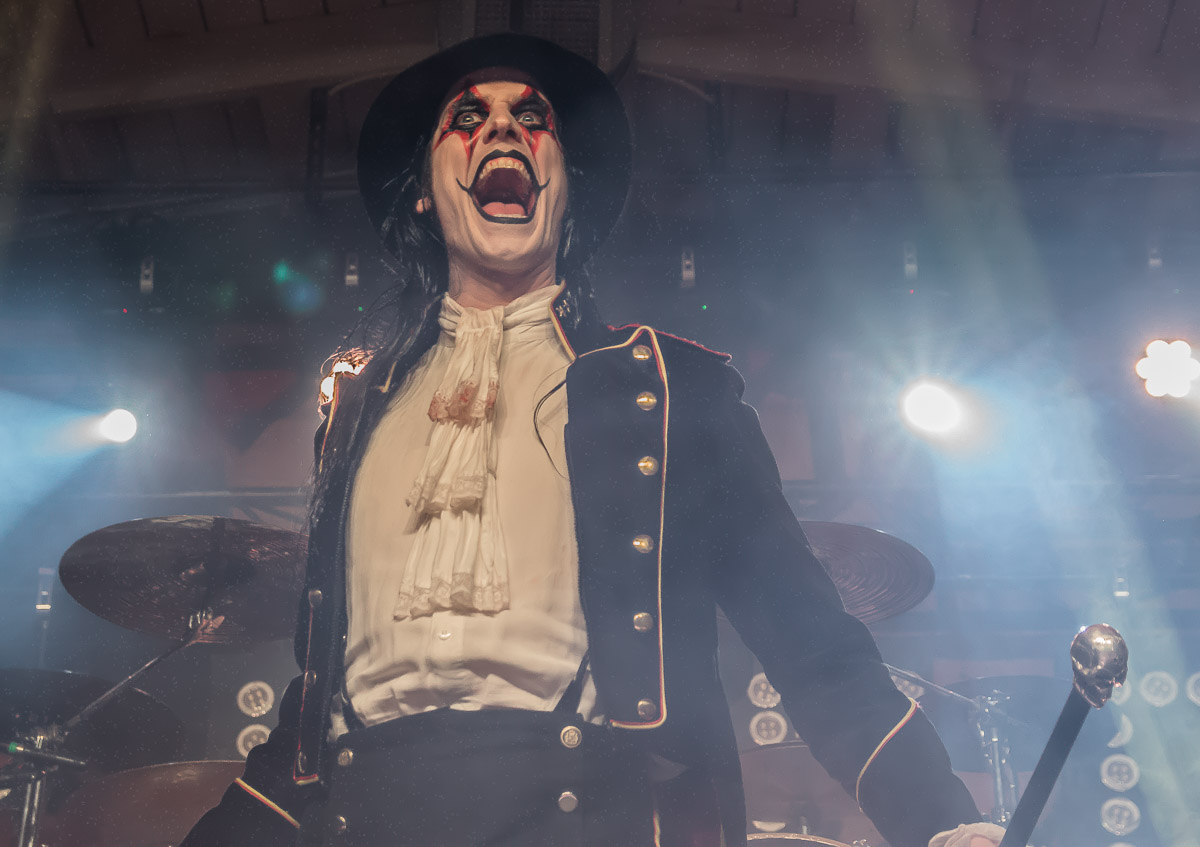 Avatar with 68′ and The Inspector Cluzo

Metal shows are almost always guaranteed to be a good time, but Swedish theatrical metal band Avatar puts on an incredible show unlike what most people have seen before.  The band, who is currently nearing the end of their tour, have been doing headlining shows as well as shows opening for Japanese metal band BABYMETAL since the beginning of September.  The band came out onto the stage this evening to a deafening roar of eager fans who were ready to rock out, wearing their signature 18th century military-style uniforms and with singer Johannes Eckerström donning a top hat, his signature face paint and a cane.  Starting things off with “Hail The Apocalypse”, the band performed a nice, varied set list of songs that included “A Statue Of The King”, “King’s Harvest”, “The Eagle Has Landed”, “Ready For The Ride” and “Get In Line”.  Towards the end of their set, after a spirited game in which Eckerström conducted each side of the crowd to see who could be the loudest, performed their song “Puppet Show” that saw him play the trombone!  Avatar is a band that can get the crowd banging their heads and have their hands in the air from start to finish, this evening being no exception.  They kept the crowd engaged throughout the entire set.  Ending their set with “King After King” and “Torn Apart”, the band left the stage before coming back out for an encore.  With a throne perched upon the stage, guitarist Jonas Jarlsby walks out on stage, having been crowned king of Avatar Country and sits on his throne.  He was then presented with a guitar, performing a guitar solo for the crowd while sitting upon his throne.  The rest of the band then came out and performed “Let It Burn” as the crowd went wild!  The band then performed “The King Welcomes You To Avatar Country”, and while most bands might let off confetti and/or streamers, Avatar let off waves of bubbles, creating a fun and magical atmosphere!  It was one of those epic, show-stopping moments that the fans will surely talk about for weeks to come.  Eckerström then told the crowd it had been a wild night and they had been a wild bunch, which just goes to prove that Lexington is Avatar Country!  He went on to say that Avatar Country was a weird ass album with the goal of opening the borders of Avatar Country and letting everyone in and to finally reveal the truth of their glorious king!  He said the album was meant to be a love letter to classic heavy metal!  He then said the album never would have worked if the fans hadn’t chosen to play along with them and said “It wouldn’t have been fun at all if you guys didn’t join in and BOY DID YOU JOIN IN!  So thank you so much for turning Avatar Country into a real place, night after night”!  They then ended their set with “Smells Like A Freakshow” for which the crowd went wild!  Avatar is a phenomenal live band and always give their fans an amazing experience!  French Blues/Rock/Soul duo The Inspector Cluzo and Atlanta rock/punk duo 68′ opened the show.