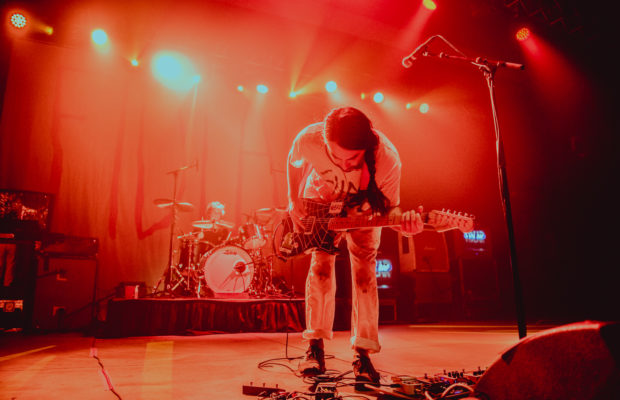 FIDLAR with Dilly Dally and The Side Eyes

Punk never dies, and LA-based FILDAR proved its certainly alive and well, bringing their 2018 tour to The Van Buren in Phoenix to a raucous audience. From the minute doors opened, the mingling crowd was abuzz with anticipation. The range of ages represented was striking; from young children with their parents to aging punks, the diversity of attendees is a testament to FIDLAR’s infectious energy. The band brought two female-fronted groups on the road, a refreshing and welcome choice. Dilly Dally and The Side Eyes’ sets impressed with irresistible energy, thrashing arrangements, and undeniable spunk. Sufficiently riled up after the openers, the audience simmered with energetic enthusiasm, boiling over when the lights dimmed for FIDLAR’s entrance. The barricade quite literally shook as fans jumped against it, consumed by the opening whining guitar notes of “Alcohol” that kicked off the set.

With only two full album releases since their debut in 2012, FIDLAR managed to pack their set with the majority of their discography. The members of FIDLAR have seen quite a lot in their lives-lead singer Zac Carper spent time in rehab and bassist Brandon Schwartzel spent time on the streets-and they reflect their experiences in their music. Songs like “No Waves” (written by Carper about his time recovering from drug addiction) and “40 Oz. On Repeat” showcase FIDLAR at their finest: speaking to intense, relatable struggles with unrelenting punk energy. Hailing from the beaches and skate parks of southern California, FIDLAR maintains a quintessential skate/garage punk energy onstage, infusing their performance with seemingly boundless energy, while maintaining effortless nonchalance. Throughout the night, the crowd’s attention was wrapt on FIDLAR. From old favorites like “Stoked and Broke” and “5 to 9” to recently released “Can’t You See” the audience jumped and screamed the night away right along with the band. “Cheap Beer” closed out the set before the band quickly returned to the stage, answering thunderous cheers, for an even more buzzing encore. Both band and audience left it all on the floor with closing “Cocaine”. Leaving the venue, attendees were sweaty, hoarse, and grinning-the clearest evidence of a show well done.