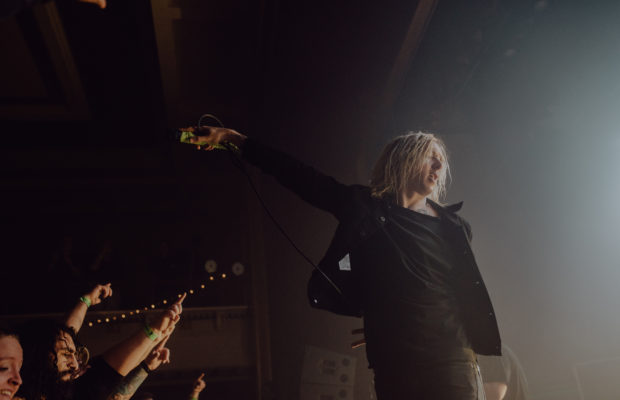 Underoath took an evening off from their tour with Breaking Benjamin to play to a sold out 500 cap room in Columbus, Ohio last weekend at the Athenaum Theatre. While many would have guessed the show would be hosted in the venues larger ballroom, it actually took place on the third floor of the building, in a room typically used for, as tweeted by a local to the band shortly before the show, high school proms.

The show lineup was short and sweet, with the only opener being the Columbus based post-rock instrumental band The End Of The Ocean. Their set clocked in about an hour, but it felt way less. Never would have expected an instrumental band to open up for Underoath, but I also don’t think any of us expected to be seeing them in such an intimate venue either; especially after coming off a Grammy nomination, followed by their largest headlining arena show in Tampa, FL.

Excitement filled the room as the stage was set up with almost their full production; and I’m honestly a sucker for a big production in a small room, especially when it comes to photographing and documenting it. Underoath opened up new crowd favorites “On My Teeth” and “Rapture”, as well as playing “Hold Your Breath” live for the second time ever. They also played their staple hits “It’s Dangerous Business Walking Out Your Front Door”, “A Boy Brushed Red Living In Black And White”, as well as ‘Young and Aspiring” and “In Regards To Myself”. Lead vocalist Spencer Chamberlain shred his voice on every song with his best friend Aaron Gillespie backing him up. Their chemistry in between every song showed how much healthier their friendship has become since their rebirth as a band; not only their friendship though, because Chamberlain is celebrating 3 years of sobriety this year, which is subject that most of their new album touches on.

Seeing Underoath play in this small theatre was very reminiscent of their mid 2000’s shows, even with the (very small) barricade, it didn’t stop the connection that Chamberlain continues to carry with his fans. And even having been around for 20 years, Underoath continues to prove that they are an unyielding, unstoppable band.