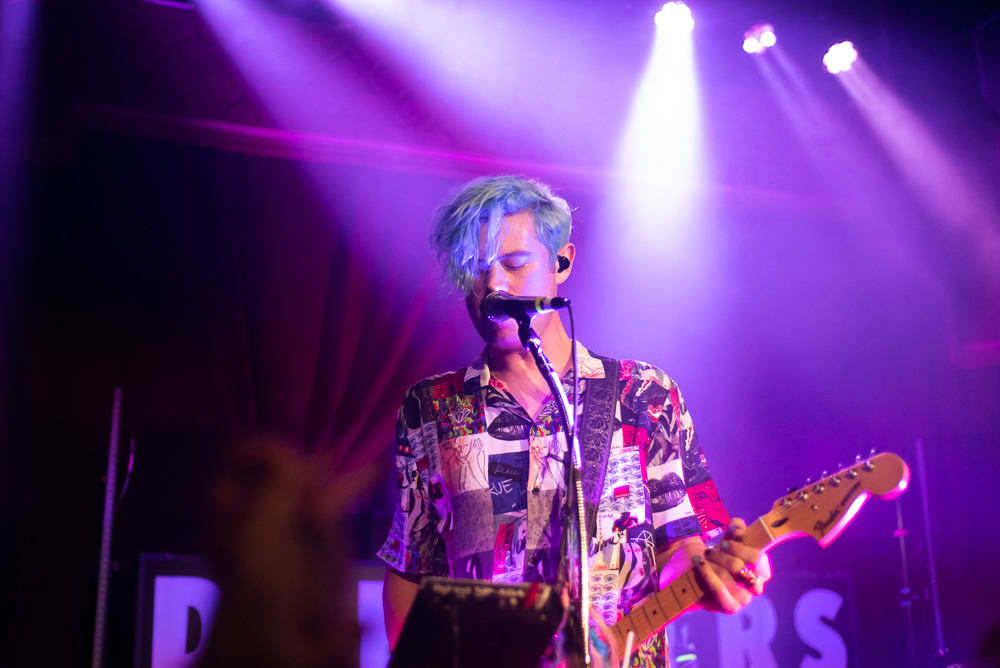 Another season, another reason to see Dreamers live. On their Die Happy tour my favorite California boys brought along Irontom and Arrested Youth to support them as they celebrate their latest album “Fly Launch Land”. The band played last Tuesday night at the House of Blues’s Bronze Peacock room in Houston, Texas. An eventful night as the Astros played the World Series and sold out show was playing next door I was still happy to be in the snuggly room watching my favorite band play. I wasn’t sure what to expect from the openers, but Dreamers haven’t disappointed me supporting acts so I had to trust that whoever they brought along were going to be amazing.

Irontom who opened the show might be the weirdest band I’ve seen discovered in awhile. While musically they’re a perfectly fine alternative rock band with indie vibes, well structured and perfectly enjoyable. Containing members of AWOLNation Zach Irons and Daniel Saslow, Irontom is are an experience to see perform live. Lead vocalist Harry Hayes does not shy away from making it weird on stage in the best possible way. Stripping away a giant coat to reveal a nice shirt and tie then stripping that away to a nothing but a tank top by the end of the performance everyone was swooning. With crazy bold eyes Hayes becomes more than just the pretty face fronting a band, he’s a mad man with erratic movements that are just so enjoyable to watch. With fun beats the band really takes over the small stage of the Bronze Peacock and makes the most with it. Ending their six song setlist with the track “Be Bold Like Elijah” left the crowd pumped for the rest of the night.

Following Irontom was Arrested Youth. I was there for Dreamers, but many people in audience were sporting Arrested Youth shirts. I wasn’t sure if Arrested Youth was a band or gang that I was about to join, but it turns out its Ian Johnson. Still early in his career Arrested Youth seemed to not only be a musical alias but an idea as well. I haven’t cracked the code on what Johnson is about, but I do knew so far it’s fun and entertaining. It’s hip-hop meets rock (think Twenty-One Pilots). With lyrics that come across both sad and uplifting and honest, but also sometimes funny Arrested Youth is doing a lot. I find Johnson’s energetic and charming. At some points he’s very serious as he raps, but then at moments you can tell that’s he’s quiet goofy and fun loving. At one point he was crowd surfing with a crowd that couldn’t keep up a lost his balance a bit, a good sport he just laughed off and continued to kill it on stage.

Last but not least as the Astros were losing Dreamers graced the stage. Opening up with “SCREWS” the band looked the audience was all there for Dreamers. Lead singer Nick Wold, sporting a teal hair made a comment that this room must be filled with the only people in Houston that don’t care about baseball. To which my friend who was on her phone looking at the scores looked up and said “What?” Then he was quick to respond “Never mind”. The setlist was a great mix of all the songs the band has been out out plus a few surprises. The setlist included a new track titled “Desensitized”, I was excited to learn that they were already back to writing music right after. “Desensitized” will be debuting November 8th. Another moment that I thought was really nice was towards the end of the performance the band played an acoustic cover of “Karma Police” by Radiohead. The band closed out the show with a “Die Happy” walking off the stage with tons of applauds. They returned to play an encore for the fans wanting more Dreamers and less baseball. This is my forth time seeing Dreamers and they just keep getting better and better as far as I’m concerned. With Arrested Youth and Irontom on board for this tour there is no way you’re going to have to good time.