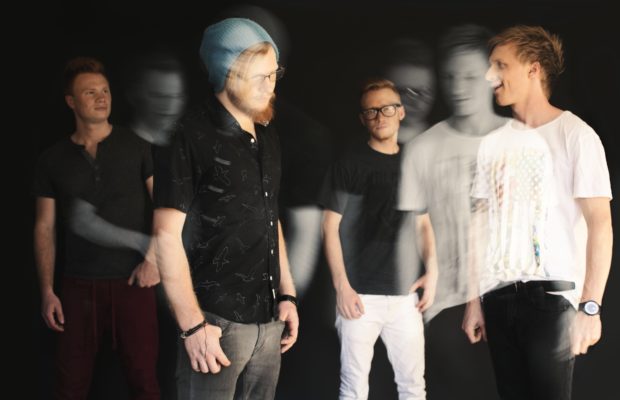 Nashville-based indie pop-rock band Fuel on Fire have been steadily growing their fanbase over the past few years.  Consisting of Edward, Joe, Ben and Kurt Doerfel, the brothers have been playing music their entire lives.  Born in Buffalo, NY, they performed with their parents and 6 other siblings in the family’s Bluegrass band, the Doerfel Family Bluegrass Band, performing at fairs, festivals and a variety of other stages across the country.  The family later moved to Key West, FL, where the brothers became interested in electrical instruments and their musical tastes evolved to bands such as Switchfoot, Coldplay and U2.  With a change in the sound and direction of the band, the four brothers changed their name to Fuel on Fire in 2017.  Ben and Edward spent a year making frequent trips to Nashville, where they worked with some of the city’s best songwriters including Zac Maloy (Daughtry/Plain White T’s/Carrie Underwood), Brock Berryhill (Twenty One Pilots/Halestrom) and Terry Sawchuk (Alanis Moreisette/Smash Mouth).  Their songwriting collaborations resulted in the band’s 2017 self-produced Think EP.  They moved to Nashville shortly after to grow their band and music career.  Aside from being musicians, the brothers are also avid Hockey fans and play in a Nashville Hockey League called the East Side Hellhounds that includes other musicians, as well.  They recently released their latest single “Figured You Out”, as well as an accompanying video that they shot in 3D Virtual Reality.  As self-described “tech nerds”, they are hoping to experiment more with VR going forward.  The band recently finished writing some more songs with Zac Maloy that they are excited for people to hear!  You can follow Fuel on Fire and stay up-to-date with all upcoming music and tour dates, as well as stream and purchase their music via the following links.  Check out their track “Figured You Out” below!

“Figured You Out” is different cuz like you said, I wrote it by myself! It was inspired by a friend who was on tour with us who loved to freestyle. I made this bouncy video game beat and started freestyling to it and wound up finishing it really fast, which rarely happens.

You also recently released a video for the song that you shot in VR. What inspired your fascination/love for virtual reality and that style of filming? You’ve mentioned experimenting a lot with VR lately. Do you have any other VR videos coming up?

We’ve always been tech nerds and have been into photography and cinematography since we were young. That being said, we are always looking for different fun things to do. Ed (vocals/keys/mando) got us all into Virtual Reality. He was inspired by Dale Earnhardt Jr., who we got to know in Key West, to get a VR racing game setup and once we all tried it we knew there was something special to VR. We want to shoot a live concert in 3D VR in the future!

You recently released an EP of covers called ‘Them’. What led you to record your version of U2’s “With Or Without You” with a choir of 4th and 5th graders? What was that experience like for you, as well as for the kids? What was it like to have the release party at their school?

Getting to record “With or Without You” with the Campus School choir was a blast. We’ve played with school choirs in the past and they were good, but this choir really had something special (as you can hear on the track). We didn’t just go in and record them singing to the song. We all had a great time together goofing around while recording. Music should be fun, and it’s important that kids experience that! Having the release party at the school was definitely a highlight for us, mainly cuz we got to be a special part of those kids’ and their parents’ lives, and they’ll hopefully always remember that! We will!

You’ve undergone writing sessions in Nashville with acclaimed songwriters such as Zac Maloy, Brock Berryhill and Terry Sawchuk. What was your songwriting process like before these sessions and what did you learn from the sessions? Did they change the way you approach songwriting?

We’ve been really lucky to have a handful of co-writing mentors in Nashville. We’ve learned so much, but probably the biggest lesson is to write with the intention of connecting and relating to people around the world while telling your story. It’s so easy to forget that we make music not just for ourselves, but for everyone that hears it.

You are originally from Buffalo, NY, moved to Key West, FL as young adults and now reside in Nashville. How do you feel that these different environments shaped and influenced you as individuals and as musicians? What do you love about living in Nashville and the music scene there?

There are a lot of good and bad habits we’ve learned along the way in all the different places we’ve lived and all the different styles of music we’ve played. Growing up in the bluegrass scene really helped sharpen our instrumental skills. Living in Key West and playing beach bars for 10 years, we got a whole lot of stage time under our belts. Playing cover music can only fulfill that creative part of us artists for so long. Key West helped us see that, so when we got the opportunity to go to Nashville and try doing our own music, we jumped on it. Musically, Nashville is like a restaurant that only serves desert; So many talented people and so much great music everywhere you turn!

You grew up playing in your family’s Bluegrass band, performing at fairs, festivals and any other stages that afforded you the opportunity to make a living out of playing music. What was it like growing up in that environment, touring the country and playing music? What do you think you learned about yourselves and the industry from the experience? Do you think it fueled your desire to continue on the path of music?

It was really fun and simple actually! We got to see the country, meet and make new friends all over the place, and I’d say we got a lot of life experience at young ages.

Growing up we were in the bluegrass industry with the family band and to be honest it was a very small and tight knit community. I’d say we didn’t learn a whole lot about anything outside of that until family band signed with a label in Branson, Missouri. We recorded our first original album with them and that was the first encounter with drums in our music. That alone opened up so many possibilities. We discovered another musical world blending acoustic bluegrass instruments with drums!

Music is the only thing we’ve ever known. That’s good and bad. Of course it can be so much fun, but it’s easy to let the work ethic slide and just start doing it as a “job” when you do it every day to survive. We’re lucky, that’s for sure.

You are all gamers and self-described “tech geeks”. What are your favorite video games? Seeing as music and technology are so intertwined these days, do you feel that being “tech geeks” gives you an advantage in the industry?

We all love hockey so obviously NHL series by EA Sports. They have been slacking on their game development lately, but we still play it cuz it’s hockey! Each of us have our favorites, Kurt (drums) is champ in Rocket League, Ben (vocals/guitar) goes between Rocket League, Shooters, and racing, Ed mainly sticks to Hockey but he’s also big into VR racing as mentioned earlier. Joe (bass/vocals) likes mainly Shooters. It definitely gives us an advantage, especially on the cinematography and photography side, but we try not to let video games get in the way of music…that doesn’t always work out!

You guys tour with your own LED walls and light show, aiming to give your shows an arena feel in a smaller setting. What was the process like in developing your live show/stage production? Have you always had an interest in lighting?

It started out as “let’s get a few lights just so people can see us in darker venues” to “Wow this DMX lighting world is pretty crazy and fun, we need more lights!” We usually start off by taking the song we want to create lighting to and asking ourselves what the song makes us feel, and what do we visually see when listening to it, then we translate that into colors and visuals with the LED walls. It’s really a ton of fun but also a ton of work! Have we always had an interest? Yes in a way. We’ve always appreciated bands we saw live who had amazing visuals that complemented the music and just added another dimension to the experience, deep down we’ve always wanted that.

You are all avid hockey fans! How did your love for hockey begin? What can you tell me about the hockey team you play on in Nashville, the East Side Hellhounds?

Growing up in Buffalo, New York, hockey was life. Our dad played in college and got us all on skates when we could walk. We would play hockey on the pond all winter, and we even built an “ice rink” in our 4 car garage a few winters! We play on a team here in Nashville, The Eastside Hellhounds. It was started by a bunch of musicians and we happened to run into then while they were building the team. The team actually has some sponsors and a pretty decent fan base!

Well! We haven’t actually played at any colleges as of yet, but we have some booked and will find out what it’s like soon enough!

You just finished writing and recording some new tracks with Zac Maloy producing them, mentioning what a great mentor he has been for you. What have you learned from him and what kind of advice has he given you?

Zac is the singer for The Nixons. He knows what it’s like to be a new artist so his help has been huge. He has also had his songs recorded by a lot of great artists like Halestorm, Skillet, 3 Doors Down, Daughtry, and a ton more. He has really helped us hone our craft as songwriters. We’re really lucky to be working with him.

What’s next for Fuel On Fire?

We are super excited about these new songs we did with Zac. We may do an EP, or some singles, or who knows maybe something revolutionary!