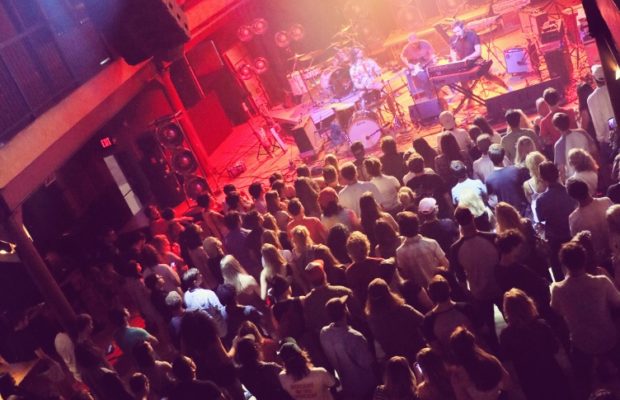 Unknown Mortal Orchestra made a stop on their tour on July 20th, 2016 at Pontiac Michigan’s Crofoot Ballroom.

The band is touring to spotlight their latest LP release, “Multi-Love”, which was out May 26th of this year via Jagjaguwar Records.

Unknown Mortal Orchestra was touring supported by Swiss duo, Klaus Johann Grobe. Their touring lineup consisted of a drummer and keyboard player trading vocal duties, while a bassist nodded his head to the beat between them. The band brought an electronic Krautrock feel, authentically singing in German. In fact, the most frequently used word that I picked out was “tanzen”, which means (fittingly) “to dance”. The crowd, that was filling in throughout the set, was bobbing their heads and dancing in place. A flashing array of lights set the get up, get down mood.

When Unknown Mortal Orchestra took to the stage, they were welcomed by a barrage of cheers from the knowledgeable audience. Starting off the night with 2013’s “From The Sun”, lead singer and guitarist Ruban Nielson (with left fingernails painted black) sang out the track’s insightful lyrics. “Isolation can put a gun in your hand, it can put a gun in your hand…” Bassist Jake Portrait warmed my heart exceptionally by wearing a Bad-era Michael Jackson t-shirt.

UMO’s latest album, “Multi-Love” presents a band coming into their own sound in a deeper and more exploitative way than ever. With a Stevie Wonder-feeling groove, Princely ambiance, and a psychedelic vibe, UMO provided a powerful, passionate set, FULL of musicality. Their distinctive tone with keyboards, bass, drums and effects pedals are unique from any other group out there, both throwback and futuristic at the same time.

The band covered material throughout their span of three studio albums and six years rocking together. Lit by a series of circular lights that were set up in the back of the stage, the luminescence changed color with and through each tune.

Audience dancing especially ensued for fun tracks like, “Swim and Sleep”, which narrates wishing to span the vast oceans like a gill-clad, toothed creature.

At one point, Nielson ventured over and hopped up on the bar, reaching out his hand to fans in the beverage vicinity. As he made his way back to the stage, microphone cord in tow, he took hands with almost every single member of the front row. During “Ffuny Ffriends”, the band made room for instrumental breakdowns and got the crowd clapping along.

After several songs, Unknown Mortal Orchestra thanked the crowd and exited the stage.

The fans, many with drinks in hand, were still thirsty for more.

UMO closed out the night with “Checking My Phone”, as the crowd sang along, and clapped out their heroes.

Unknown Mortal Orchestra will be touring throughout the US into September, before closing out their tour with a stop in Colombia this October.

Find UMO on the web –

Check out the video for the title track off their latest album, “Multi-Love” –