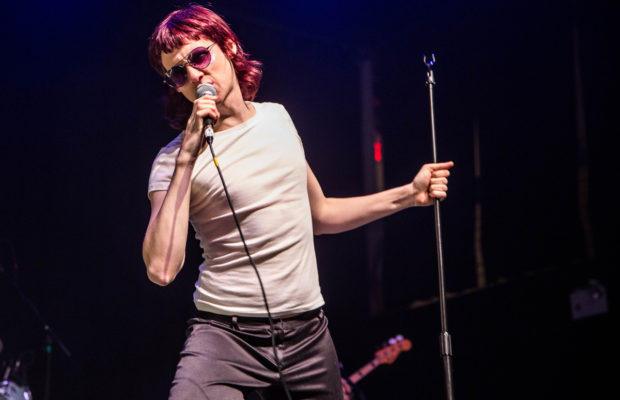 Friday night in New York City means that anyone is doing anything, but over a thousand of us chose to spend inside Hell’s Kitchen’s factory-like venue, Terminal 5. Looking around at the crowd, one would think that the L train from Williamsburg took a sharp right and headed due north to the venue doors. Distressed, ankle length mom jeans with white tube socks and oversized thrift shop shirts were the attire for the night, a look that quite fit the sound of the evening. Hailing from a small town just outside of Los Angeles, the indie rock duo Foxygen have made quite a name for themselves since their fruition over a decade ago. With the release of their newest album Hang kicking off the new year, the duo returned to the big apple last night to put on a show for the decades, bringing along Purr and Sunflower Bean to start off the night.

What started as a college project between two guys, ended up being the opening band. Purr, who site their musical genre as “Melodic Grunge or MELUNGE for short”, brought their sedated indie sound to the show last night. Amongst the roars of the talking crowd and the splashing on the PBR constantly circulating from the bar, Purr managed to captivate the crowd. The band carried themselves with the pride and composure of a band that’s been around the block a couple of times. While the founding members, vocalist and lead guitarist Josh and drummer Joey, remain, the band has undergone dramatic lineup shifts since their inception nearly five years ago. Much to the dismay of the new fans, the band admitted the show was only their second show together and they don’t have any music released yet.

Next up was a sort of homecoming show for the classic rock inspired trio, Sunflower Bean. Gracing the stage, lead vocalist and bassist Julia Cumming announced “We’re Sunflower Bean and we’re from New York City”, before sticking her tongue out while giggling and saying “you guys are too! oh my god!”. At the stroke of the first chord, it was clear to see the band has garnered a following and there were some major Sunflower Bean fans in the crowd. Their nine song setlist was packed with a diverse range of songs, but the band crush the live performance of their newer tracks from last year’s debut record Human Ceremony. From the beautiful harmonies heard in “2013” to the the Real Estate-esque sounds of “Easier Said”, Sunflower Bean put on a killer performance. Denim jackets were coming off and everyone’s Reebok Princess’ (circa the 1990’s) were getting in shape as beers were spilling and hipsters were dancing. The band concluded their set with their angsty grunge-efied track “I Was Home”.

At last all of the gear was cleared from the stage and fans got a glimpse of the baby blue drums and the tube light lined keyboards that framed the stage. A single microphone stood centered in front of it all and not before long the lights dimmed. The horns section graced the stage, followed by the drums and the bass before the duo that is Foxygen pounced onto the scene. Jonathan Rado took a seat behind the keyboard at stage left, with a guitar and mic stand to his right to allow for easy transformation into a rockstar, while Sam France ran in and grabbed the mic stand, waving it around. The band kicked off their over the top enthusiastic set with three tracks from their 2013 release We Are the 21st Century Ambassadors of Peace & Magic, including “San Francisco” and “Shuggie”. The setlist then shifted to the star of the night: Hang. Foxygen captivated the crowd, which for many was their first time hearing the record live, as they played the album in full from front to back. These New Yorkers (who are we kidding… Brooklyn-ites) couldn’t get enough. The band drifted away backstage as the chants for an encore filled the three story venue. Upon gracing the audience with their return, Foxygen concluded their fantastic set with a three song encore featuring “On Blue Mountain”, “How Can You Really” and “No Destruction”.