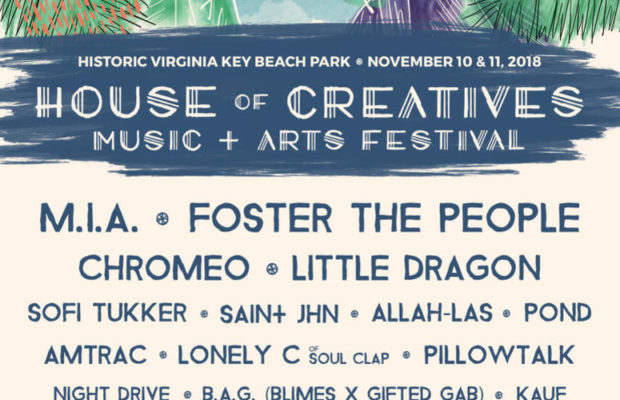 By the beginning of November, many places across the US are seeing cold temperatures and possibly even snow. However, the story is completely different for the beachside city of Miami. During the second weekend of November, the city will host the House of Creatives music festival — a two day music festival bringing music fans from far and wide together in the name of music. The festival will feature a wide variety of performers across all musical genres and will feature some of the best food and activities to round out your experience at the festival and make it the best it can possibly be! Below, you can check out our list of the top artists to check out at the festival. Seriously, you won’t want to miss them!

Chances are you’ve heard their music before – their song “Best Friend” was the soundtrack to the iPhone X commercials! Sofi Tukker is an electronic music duo powerhouse. Compromised of friends Sophie Hawley-Weld and Tucker Halpern, these two recently released their critically acclaimed debut record Treehouse. Their music will be sure to transport you to a beachside club in the Caribbean with their tropical house music, so catching their performance will be a must do!

If you’re looking for some easy, breezy, California-vibe instrumental music then you should definitely make sure to check out Freckles at House of Creatives Music Festival. Hailing from Southern California, Long Beach to be specific, Freckles music is filled with sunshine, warmth and happiness. There will be no better way to kick off your weekend at HoC than with Freckles.

Local to the Miami/Ft. Lauderdale area, Love, Abbey will be bringing her indie pop tunes to the HoC stage. Love, Abbey represents everything fundamentally indie within the music industry, most recently crowdsourcing the funds for her debut EP, Lost At Sea in 2016. Since then, Love, Abbey has been climbing the charts and branching out of the local neighborhood venues. Her hometown performance will surely be one for the books!

If you want to throw down in park and dance around with your friends than we highly recommend you check out Pillowtalk. The trio consisting of Sammy D, Ryan Williams and Michael Tello, make music that combines the genres of R&B, boogie and house and underground disco. Those three combined create the ultimate recipe for the best dance party ever.

The genre of surf rock tends to often be overlooked, by Allah-Las are dominating the genre. Their music will instantly transport you to Southern California, a setting filled with beaches, sun and surfing. Easy drums and guitar will offer you a period of blissful relaxation during their performance, and who doesn’t want that?

Hailing from Sweden, Little Dragon will be bringing their electronic music straight to Miami. Their live performances are definitely something to check out, bring some friends and dance around as the sun sets on the final night of HoC festival. There’s no better way to close out the night than to spend an evening with Little Dragon. We highly recommend catching their performance.