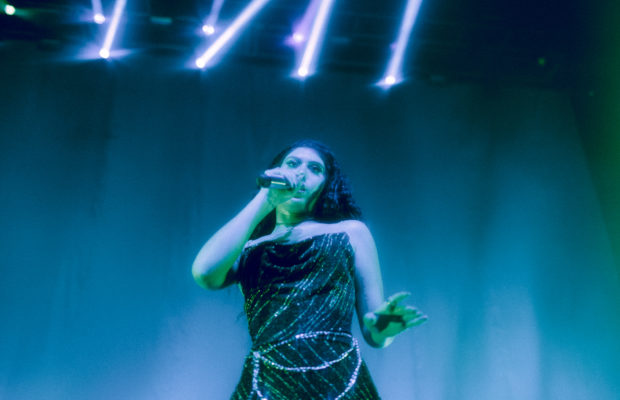 Last night, a sold out room of 2,500 people got on their very own “Flight 22” with Kali Uchis at the Chicago date of her “In Your Dreams” Tour. With fans frantically searching for tickets on social media all day, and lined up down Racine Avenue for hours before the show, anyone on the sidewalk could’ve predicted the show was set to be a good one. However, no one anticipated the liveliness and warmth the audience would feel throughout the performance.

Opener Gabriel Garzón-Montano kicked off the night with his funky but poppy R&B, warming up the audience and preparing them for the main event – Kali Uchis, herself. The crowd responded well to Garzón-Montano, which came as no shock, but their response to his set was nothing in comparison to when the clock struck eight and our melody-carrying muse walked out onstage.

Once her set was slated to begin, the band waltzed out to start their piece, and then, suddenly, as smoke filled the stage and the lights dimmed with a reddening glow, she appeared. Silhouetted by a white backdrop, Uchis struck a pose a handful of times, before walking out from the backdrop to begin with a performance of “Dead To Me,” off of her debut full-length album, Isolation.

Waltzing forward across the stage like someone from a different time period, she glided, twirled, and danced in her black jumpsuit, coated in shimmering stripes of silver. Her long black hair, crimped tightly and let loose, fanned around her as she moved, almost in slow-motion in front of the crowd.

Her visual aesthetic, something characterized by glowing lights, mysterious smoke, and deep red and blue lights, matched up perfectly with her sound. Uchis has a voice that is something so unique in today’s music world – it is multifaceted, sweet, and something timeless. She has a very soft and light voice, but one that can fit in with funky, disco beats or with the oldies radio stations. Her music is an eclectic mix of old and new, soft and fierce, playful and serious. She showed this her entire set, when she altered between her more upbeat, fast-paced tracks like “Just A Stranger,” and “Your Teeth In My Neck,” and her slower pieces like “Flight 22” and “Loner.” She also managed to show her old-soul, performing a cover of Donna Summer’s “I Feel Love,” a hit disco track back in the ’70s.

Another aspect of Kali Uchis’ performances that sets her apart among other artists of her age and in her genre is the way she incorporates her culture into her sound. Uchis, as a 24-year-old Colombian-American woman, makes music that is bilingual, so that she is connecting with fans who speak both spanish and english and she is representing her heritage. This is something rarely seen at the forefront of the music industry, but it shined through last night when she performed her singles “Tyrant” (which is actually a bilingual song that also has a fully spanish version available), and “Nuestro Planeta,” which is fully in spanish. It was almost as if her audience was echoing back her words even louder for these two songs, because of the different dynamic they have from the rest of her discography.

Looking at the way Uchis dresses and performs, it would not feel wrong to peg her for an old-soul. She made this even more clear when, in between tracks, she stopped to explain to her audience that she’s experienced quite a bit in her life. She expressed very firmly that everyone in the room had a reason to be here right now, and all had a purpose. This is a sentiment that not many artists stop to express, and it does not go unnoticed. Kali’s crowd was cheering at the top of its lungs the second she spoke those words.

Consistently, from the beginning of her set to the end, Uchis’ made the stage hers. She crooned out soft-spoken lyrics and swayed like an old-school, genuine, jazzy, bluesy singer, but also shook and shimmied and danced like a disco-pop, R&B queen. After seeing how incredibly she performed a sold-out night at the Riviera Theatre, this early-on in her music career, it will be exciting to see where her groovy music and her nuanced style and her glowing persona take her.