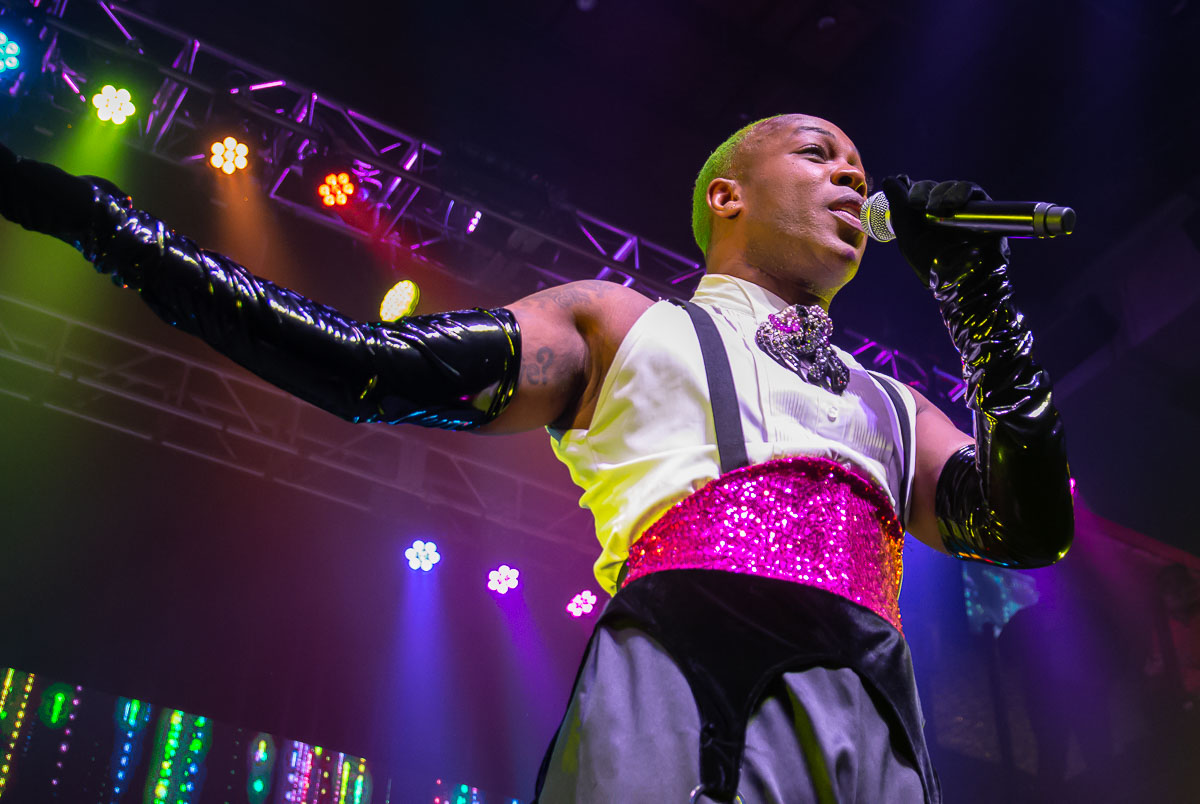 Todrick Hall brought his Femuline Tour to Louisville, KY recently.  Starting things off this evening was Kentucky native Josey Greenwell, performing a hometown show!  Heating up the stage with his two dancers, he talked about how excited he was to be touring as support for Todrick Hall on the Femuline World Tour.  Keeping things exciting and high-energy, he and his dancers kept the crowd in high gear throughout their set!  With different lighting corresponding to the mood of the songs he sang, it was a great set that got the crowd warmed up and ready for the evening ahead!  Next up was Todrick Hall.  Comprised of two acts, the first act saw Todrick in drag, with a custom costume, wig, and makeup, creating a fun and high-energy atmosphere on stage with his many dancers.  From the first note, it was a party on stage! Singing plenty of songs that included “Queen”, “GG”, “Show Off”, as well as some multi-song medleys, he and his dancers kept the crowd dancing and singing their hearts out! At one point, a spoken word segment was featured on stage, where a few of the dancers told their stories, whether of coming out as intersex to the struggle of being diagnosed with alopecia as a model and being shunned by the industry.  The lighting was soft, with beautiful dancing and, at times, the appearance of the dancers’ silhouettes.  Todrick addressed the crowd later in the first act, saying that he likes to take some time during each show to thank the crowd for coming out and supporting him and his videos over the years.  Going on to say how hard it is to be a self-made Black artist with no backing from a major label, he talked about how the past few months have been hard and how difficult it can be to be a public figure and going through things publicly that should be figured out privately.  He talked about how in 2019 he was in a dark place where he looked in the mirror and questioned things he already knew, like “Am I good enough?” and “Do I deserve success?”, realizing how looking in the mirror and loving the person who looks back at you is the hardest thing you’ll do, but also the most important and rewarding.  He then sang what he called the closest thing to a love song (“I’m Beautiful”) he had ever written, with the hopes that it would touch everyone else as much as it did him when he wrote it.  He then shed his wig and asked “Do you know that you’re beautiful? As my friend/mentor RuPaul says, “If you can’t love yourself, how you gonna love somebody else?””.

After about a 15 minute intermission, Todrick and his dancers came back out for Act 2, this time wearing sleeveless white shirts, black pants and suspenders, and a bright pink sequined cummerbund, with no wig for Todrick.  They also wore nun costumes for one part of the act!  Performing songs in this act such as “Dysfunctional”, “Rainbow Reign”, “Glitter”, and “Nails, Hair, Hips, Heels”, he also performed a new song called “Breath”, which saw him exit the stage and enter stand at the barricade, engaging/interacting directly with the crowd, shaking hands, and telling audience members how beautiful they are.  All in all, this evening was one big party from start to finish! You can connect with Todrick Hall HERE and Josey Greenwell HERE.