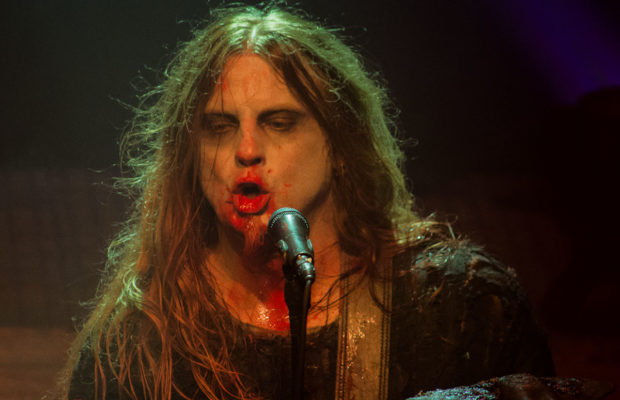 The Polish metal band Behemoth rocked Louisville, Ky recently, performing to a nearly sold out crowd of fans.  Donning all black clothing and white and black face make up, the band had the crowd’s hands in the air from the moment they walked on stage.  The band had an impressive stage set up, with platforms at the back of the stage on which the singer, Nergal, guitarist/vocalist Patryk Sztyber and bassist/vocalist Tomasz Wroblewski took turns standing and performing.  There were artistic metal pieces hanging at the back of the stage, as well as intricately designed microphone stands and amazing lighting throughout the set.  Sztyber, Nergal and Wroblewski frequently stood at the front of the stage and performed directly to the crowd, which delighted their fans.  The entire band donned devil masks, with Nergal, Sztyber and Wroblewski wearing capes, as well, during their pre-encore song “O Father O Satan O Son”.  The band truly love and appreciate their fans, taking a bow and shaking a few hands as they left the stage before their encore.  Ending their set with their track “Pure Evil”, the band left their fans buzzing with energy from an amazing night of metal!  Opening the show were local Louisville metal bands Anagnorisis and Savage Master.