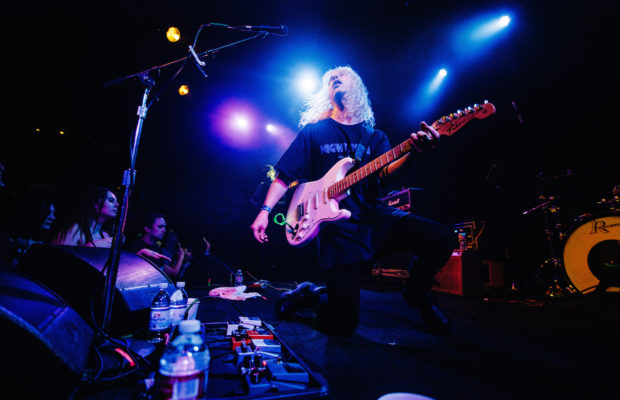 The Wrecks, The Hunna, and The Shelters

Up first were The Wrecks and they went off with a very energetic bang. The band sounded huge even in The Crocodile thanks to their use of three guitars heavily projecting into the crowd. They bounced around stage and engaged with the crowd a ton. As an opener they took the time and effort to perform their hearts out. The Wrecks were well rehearsed and had excellent stage presence.  Considering that they have only been a band for just over a year, they have a pretty good idea what it means to put on a show.

With all of this being said though, I can’t help but feel their music itself is somewhat forgettable. They stay true to the genre. Song structure doesn’t deviate much from the “verse, chorus, verse” style that is fairly common to songs in this spectrum of music. When that is coupled with uninspired lyrics about being in love and using hackneyed phrases such as “turn it up,” the music feels boring. They are extremely talented musicians however, and that is obvious when watching them perform. There is so much potential in this band and hope that as they continue to write and perform they strive to develop their own sound and separate themselves from the myriad of other pop rock bands that exist.

The Hunna took the stage following The Wrecks and right off the bat, made a great impression. Their stage presence was contained and professional while still being very entertaining. The crowd truly was all in and they certainly held my attention for their entire set. After they announced that they had been a band for eight years, it was no surprise as to why they exuded a much larger presence of a professional band. Whether it was how they played their instruments or lead singer, Ryan Potter’s vocal control and strength.

While some of their music still music had fairly predictable song structure, I didn’t think that their all of their music felt too repetitive or generic. Their set had a good mix of songs varying in tempo, keys and feel. The Hunna’s indie influence definitely helps.

Time will only do good things for them and if they continue to push themselves as writers they’ll only do well for themselves.

Closing out the show were The Shelters, a pop rock band with a very classic sound. The guitars are very reminiscent of The Beatles and The Rolling Stones. With a mixture of harmonized vocals, it truly takes me back in time. Despite being the headliner, it was fairly apparent most people had been their for The Hunna due to the considerable shrink in the size of the crowd.

Their music stands out from a lot of contemporary pop music of today but like with the previous two bands, it sounds like it has been done before.

While their hit song, “Rebel Heart” has a very catchy chorus that hooks you in, it really sounds like they’re trying to be The Beatles rather than something new.

This all being said however, they did play a very solid set and were tight. They were calm and collected. As with the previous bands, I can only encourage them to push themselves. They’re talented musicians and as a newer band have plenty of time to grow together.

Review and photos by Tommy Calderon