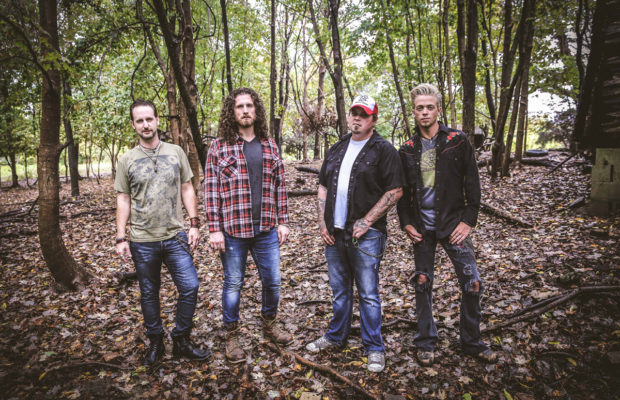 Hailing from Kentucky, USA,  American hard-rock legends Black Stone Cherry return to the UK to give their British fans a very special experience. Unlike the band’s previous headline tours, this time around they specifically selected smaller venues for their show in order to give their fans a truly intimate experience.

We recently caught up with Black Stone Cherry’s Ben Wells (guitar) and John-Fred Young (drums) and asked them a few questions towards their upcoming UK tour.

How would you describe your music in a sentence to anyone not yet familiar with it?
Ben: Real, honest music that is all things rock, southern, blues, metal, and more.
John-Fred: Our music is like putting Zeppelin, Sabbath, Skynyrd and The Beatles in a blender with 114 proof Old Grand Dad and drinking that with your breakfast plate. Enjoy!

Your UK tour is called ‘Experience Kentucky: An Evening with Black Stone Cherry’. It sounds like we are in for a treat! Did you do anything like that before?
Ben: The closest thing to this that we’ve done is the ‘Southern Hospitality’ tour we did in 2014.  It was just four small shows in the UK where we were the only band on the bill.  We took questions from the audience and they picked the set list.  It was so much fun!  However, this tour is a totally different animal..and going to be very special!  We can’t wait!
John-Fred: We try to make every show extremely special and these upcoming shows will be nothing less!  It’s an honour to get to travel around this big rock and play wonderful people our brand of Kentucky Rock n’ Roll. I can’t tell you anything else or it will give it away!  Haha!

You chose smaller venues for your upcoming tour which will change the nature of your shows and make them a bit more intimate. What can fans expect, and do you have any expectations from this new approach?
Ben: They can expect BSC like they’ve wanted us for a while, I think. Up close, personal and playing songs we haven’t played in years!  Some we’ve never played live ever!  Plus, two sets!  We’ve never done that!  Playing these venues allows us to branch out and do cool things like this.
John-Fred: We headline arenas and play clubs in the same year.  It really doesn’t matter where we are in the world, we are going to put on the best rock n roll show we can!  We did a tour called the Southern Hospitality tour a couple years ago in smaller venues and I believe people really enjoyed it.

Going on tour can be stressful and difficult at times. What do you miss the most when on the road, and what is your favourite thing about it?
Ben: Family and loved ones is the thing we miss the most, of course.  It’s a bittersweet life.  However, we love playing live and seeing the reaction from the audience. There is no better feeling than hitting that stage together and rockin’ out!
John-Fred: I miss my little girl and my wife a lot when we tour.  I do know I’m getting to do something that we all have worked extremely hard for and it’s the life I chose. Bittersweet it is, but I always think about how incredible we have things.  My favourite thing about touring is being in different places and meeting the characters of the earth. Hunting junk and antiques is also a huge thing for me, as my grandpa did for years before TV made it cool, so it’s rubbed off on me!

Do you find that there is a big difference between your UK-based fans and your American ones?
Ben: I think the biggest difference at this point is the size. We are very fortunate to have an amazing fan base of diehards!  Our fans are the best and have always been with us, and we totally appreciate that, wherever they may be from.
John-Fred: Black stone Cherry fans worldwide are amazing!  We have so many people from all over the world that we’ve became great friends with and it stills amazes me that we have built those relationships off of the music we made in a little house down on my grandparents farm. The UK fans never disappoint with their amazing energy and dedication to our band!

Lastly, what sparked your interest in music?
Ben: Simple.  Elvis Presley!
John-Fred: My dad and uncle play in the band, The Kentucky Headhunters and I grew up watching them and touring with them during the summer months when I was out of school. My dad taught me guitar at first and I couldn’t get the bar chord so I switched to drums!