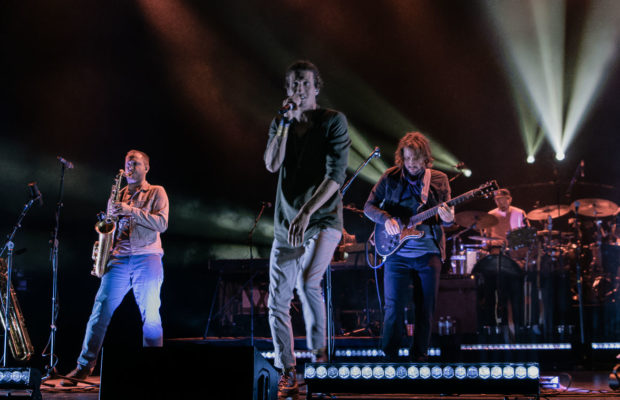 The Revivalists with Mondo Cozmo

New Orleans rock band The Revivalists, who are currently touring in support of the upcoming release of their 4th album, made a stop in Louisville, KY recently.  The venue, a covered outdoor amphitheater surrounded by a park, was the perfect setting for the evening.  The venue was packed with fans who were excited to see one of their favorite bands and dance the night away!  As the band took the stage, the crowd erupted in applause.  Singer David Shaw is a charismatic frontman, moving freely about the stage and engaging the audience throughout the set.  Early in the set, Shaw told the crowd that he was ready to move and wanted the crowd to move with him.  He said there are things in life that you can either move through or get stuck, telling the crowd to dance like no one is watching, to dance like they do in the bedroom or shower when no one is watching!  With plenty of audience participation throughout the evening, the venue definitely had a party atmosphere!  The band performed a nice variety of songs including “Chasing Fireflies”, “Criminal” and “You and I”.  The band kept up the energy through each song, with Shaw moving evenly to each side of the stage to engage the crowd directly, sitting on the edge of the stage at one point!  At the end of their set the band left the stage briefly, only to come back out for an encore.  For the first song of the encore, David Shaw and guitarist Zack Feinberg performed a song off of the new album about gun violence, a serious issue facing our nation today.  The rest of the band then joined them on stage.  Shaw thanked the crowd for coming out this evening, mentioning that the last time they performed in Louisville was at Headliners Music Hall and before that a tiny venue called Zanzabar, as well as at Forecastle Festival and thanked the crowd for their continued support.  He then told everyone to get their cell phones out and wave them around with the flashlights on, launching into “Chasing Fireflies”.   The band ended their set with their hit “Wish I Knew You”, causing the crowd to go wild!  With the entire audience dancing and singing along, it was a great way to end the evening!  They gave the crowd a fun evening of music!  Los Angeles indie rock band Mondo Cozmo opened the show!