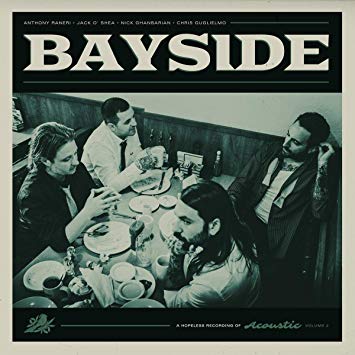 Acoustic Volume 2 takes a variety of Bayside songs, including a new track (It Don’t Exist), and strips them down into a format that allows different aspects of the bands sound to shine through.

“Sick Sick Sick” immediately grabs your attention at the record begins; the reimagined version gives the guitars a more intricate sound than the original, with the slower tempo directing attention towards the lyrics and message of the track. While the original version is angst filled and suited for a sing-a-long, this version is almost solemn in nature and seems more reflective on the message of the “Sick Sick Sick” state of a relationship.

“It Don’t Exist”, the new track on the record, starts out quiet with piano and guitar forming the basis of the song. It’s romantic message is heartfelt and portrayed well with emotionally inflictive vocals; it’s sure to become a favorite amongst Bayside fans. The lyric “I’ll take my chances with the rain” resonates throughout it as a proclamation of love being worth the risk.

The contrast in the track-listing between “I Can’t Go On” and “I Think I’ll Be OK” is interesting and adds to the album as mental health is brought to the forefront as a theme. “Howard” adds to this, as the acoustic, groovy sound is so well done that it could nearly disguise the content of lyrics “our worst critics were in our heads” if the listener is not paying close attention.

Overall, Acoustic Volume 2 is a great, reimagined representation of Bayside’s music. The added instrumentation (tambourine, piano, strings, etc) creates a dynamic soundscape that leads you to reflect on the tracks. It takes talent, creativity, and hard work to transform full band songs into acoustic versions that breathe fresh air into them, and Bayside does it well.

Personal favorites; It Don’t Exist, I Can’t Go On