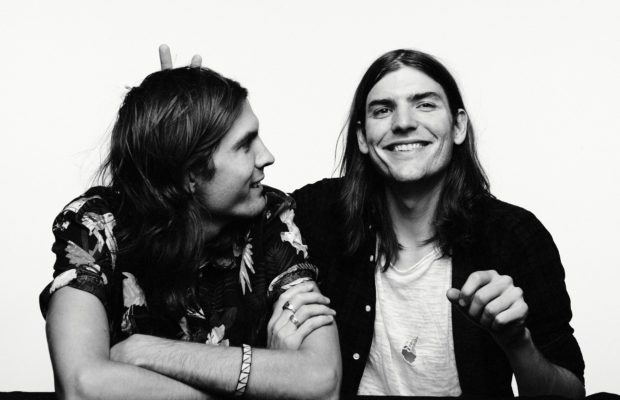 NYC-based indie-electronic/rock band The Rassle has been creating a buzz with their super catchy and feel good pop.  The band is made up of brothers Blair and Reed Van Nort, who draw influences from bands such as Kasabian and Arcade Fire, as well as ’50s Rockabilly, punk rock, music from the ’70s and New Wave.  The Rassle is a band that cannot be pinned to one genre, but rather explores a variety of sounds to create music that embodies their various inspirations.   The band’s latest single,”Roll On”, is a catchy summer anthem that has surpassed 100K streams on SoundCloud and recently made it to #2 on SoundCloud’s Global Rock Chart.  The band will be releasing their debut album on June 22nd, as well as music videos to accompany some of the new songs.  Our staff writer, Emily May, chatted recently with Blair and Reed via email about their latest single, their DIY approach to the band and their recent Spotify playlists, which were inspired by their former side gig as party DJs. You can stay up-to-date with the band and with album and tour information on their website here, on Facebook here, on Instagram here and on Tumblr here.  You can stream their music on Spotify here and SoundCloud here and check out their videos on YouTube here.  Check out their latest single “Roll On” below!  Photo credit: Jimmy Fontaine

EM: The band released the single “Roll On” last month, the title track from your debut album due out in June. I read that it was one of those songs that seemed to write itself in one sitting. What inspired the song and how often does that occur during the songwriting process?

Blair: I guess I kinda think of “Roll On” as a protest song. A reminder to keep going. To never surrender. To never quit. To keep rolling through adversity.

When we were working on the demo for “Roll On” I had the opening line first – “Money made a fool right out of me.” It didn’t really fit the pentameter of the verse but I thought it was a good line, so that’s kinda why I’m doing like a be-bop scat of the words in that part to make it work haha. Usually I don’t start writing the lyrical content of a song until I come up with a good first line or chorus part – and then that will kinda inform what the rest of the song is about.

So that’s kinda how it happened. After I had the first line the rest just came out almost free verse. I don’t think I even wrote the lyrics down. I just recorded them straight into garageband. I don’t really remember what inspired the song specifically, but being run down & broke was probably a major factor ¯\_(ツ)_/¯.

EM: With the previous bands that you guys were in you stuck to a specific sound, but with The Rassle you wanted to experiment with different sounds rather than be tied to one genre. Blair-I read an interview in which you mentioned that the liberating thing about being in a new band is is not being pigeonholed into a specific sound. What do you think changed your mindset in regards to experimenting with different sounds with The Rassle?

Blair: When you start a new project there’s no rules or regulations and you don’t think things like, “oh we can’t do this or that because it’s not us” and I think we kinda revelled in having this wall of sound mindset where we were trying to incorporate all of the other musical influences that inspire us outside of rock & roll music.

Reed: Yeah totally, I think sonically we were just looking to experiment with sounds and instrumentation we hadn’t explored in previous projects. It can be liberating to not set limits for yourself in that way.

EM: You you guys have had a very DIY approach to the band from the start, from silk-screening your own shirts to self-producing and recording your first EP. What can you tell me about the recording process for the upcoming album? How involved with the process were you compared to your first EP and what was it like to work with producer John O’Mahoney (The Kills, The Cribs, Metric)?

Reed: When we wrote and demo’d this record, we actually intended to keep the same process as previous records, which was recording in my bedroom, on a shitty old computer and a $50 mic. And honestly, I would have been super happy had we put out the demos as is.

But through a mutual friend, we met John and decided it would be worthwhile to go into the studio and work with him to see how we could develop our sound together. It was a really collaborative process.

And as much fun as it was going into the studio and working with all these massively talented people, a lot of my favorite memories recording this record ultimately happened with Blair and I recording alone in the same bedroom we started out in.

EM: Reed- you wrote a lot of instrumental demos for the new record while Blair worked on lyrics, revising and editing the songs together later. Is that your general approach to songwriting or does the process vary?

Blair: That’s generally how we roll haha yeah. It’s a lot easier for us to work that way. Being brothers we don’t really operate with a ton of egos in the room, and generally we collaborate pretty well when Reed’s not being a grumpy baby.

Reed: Also since we’re brothers we argue about the stupidest, most mundane, inconsequential things, so usually we’ll work separately, and come together once the bones of an idea are developed.

Blair: And then we argue some more about the development of those ideas and the song structure and the melodies and the musical production. Who am I kidding. We really don’t get along at all. It’s a miracle we finished this record. Lol.

Reed: Kind of like we are arguing about nothing right now….

EM: You two have had a side gig over the years as party DJ’s. How often do you DJ and what are some of the more memorable parties that you worked? What can you tell me about your Summer playlists on Spotify?

Blair: We kinda retired from djing cause it was too hard to stay out till 4am and get up to go to work at a normal hour. We still have a vast collection of music that inspires us though, so we thought it would be fun to put together a bunch of different playlists for fake parties we didn’t dj at.

Reed: One of the more productive things that came out of DJing, was figuring out what songs hit with the crowd and at what point in the night that happened. Sometimes songs worked structurally, rhythmically, or melodically, and seeing that how that stuff happens on the dance floor can subconsciously find its way into our work.

Blair: Yeah that’s really true. When you DJ at parties & clubs you start learning more about what works with the songs that people go crazy for and that’s definitely influenced aspects of our songwriting and production for sure. I’ve really learned to love the drop haha.

EM: You’ve shared the stage with some pretty amazing artists, such as Florence and the Machine, Wavves and Mystery jets. Do you have any artists you are dying to tour or collaborate with in the future?

Reed: Always loved what Damon Albarn does with Gorillaz. Touring wise, we just love being on the road with our friends, but sometimes it’s also good to make new friends… so definitely Beyonce could be chill haha

Blair: Dang, there are so many people doing cool things. It’s probably a corny choice but I’d like to work with Julian Casablancas. We loved his first solo record a lot and that influenced some early Rassle stuff and the records he produced with The Growlers & Rey Pila are also pretty awesome too.

EM: Reed- I read an interview in which you mentioned “The Wild Ones” being the song that made you feel you had found the right sound for the band. How do you think you guys have grown as individuals and as a band since you first started out and is there a song off of the upcoming album that you feel the same way about?

Reed: I mean I think as people we are always constantly evolving and growing, creatively and emotionally. I am not the same person I was a year ago, let alone when we started working on music together.

As alluded to earlier, I’ve found the best songs are often the ones that write themselves, so it’d probably be Roll On. I’ve loved that song from the first demo to the final mix and everything has happened in between. It works on all parts for me.

EM: “Roll On” is streaming well on Soundcloud, with almost 100K streams and is also featured on the First On Soundcloud Playlist! How does it feel to have such an immediate positive response to the song, especially ahead of the album’s release?

Blair: It’s really exciting that people are finding out about the song and digging it so much. As an artist of any shape or form that’s all you can ever really hope for. It’s also rad that we have platforms like SoundCloud that are geared towards helping emerging artists connect with new fans because the hardest part about being a new band with new music is finding the new people who wanna listen to it.

EM: You have both worked for years in a mix of advertising, web design, creative development and art direction/design, and have thus had the knowledge and tools to be very hands-on with many aspects of The Rassle. Was it always your plan to essentially have creative control over the band? Going back to the DIY approach, how how much of this approach was out of necessity and how much of it is simply part of your aesthetic and spirit?

Reed: When you’re a young, poor band you’re forced to figure out how to do stuff on your own. I grew up playing in punk and hardcore bands so that DIY ethos carries over into aesthetic, sound, and identity of The Rassle.

Blair: Honestly the only success we’ve had with real world jobs has been because of the things we’ve learned (or taught ourselves to do) as kids in DIY bands. We didn’t study graphic design or film in college, we didn’t take marketing classes or brand development 101 either. We kinda had to learn how to do a lot of those things on our own so we could do the things we wanted to do for the band. But the posters and the merchandise and the music videos and the photo shoots are part of what makes being in a band so fun because it’s more than just music.

EM: What can you tell me about the music videos you guys are working on for some of the tracks on the album? Do you enjoy making music videos?

Blair: They’re kinda bootleg. Not very professional. Pretty silly. Being an independent band without a ton of money we kinda had to figure out ways to be resourceful and do it on our own – so we felt like it might be better to not try and make something really slick and serious. That’s kind of our personas anyway. We think that music should be fun and you don’t see a ton of people out there enjoying themselves.

Blair: Well the record comes out in June. So I guess at some point we’re probably gonna start working on some new music for the next one lol.