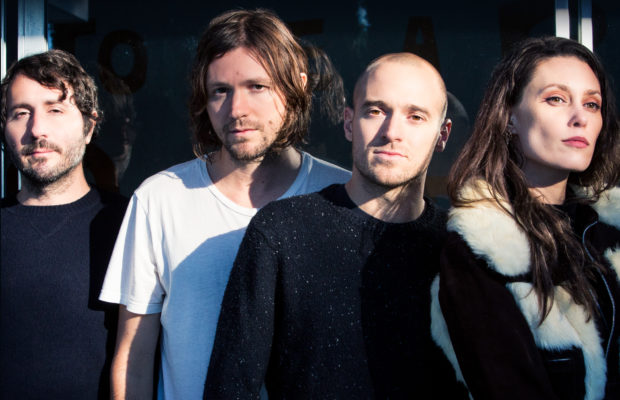 LA-based indie rock band Family of the Year have come a long way since releasing their debut EP in 2009.  Consisting of brothers Sebastian (drums/vocals) and Joseph (vocals/guitar) Keefe, James Buckey (guitar/vocals) and Christina Schroeter (keyboard/vocals), the band created an early buzz, having been chosen by Ben Folds and Keith Lockhart to open for Ben and The Boston Pops at Symphony Hall, as well as a West Coast run of shows with Bell X1.  The band’s real breakthrough came in 2014 when “Hero”, the 2nd single from their 2012 album Loma Vista, was chosen by director Richard Linklater for his Oscar-nominated film Boyhood.  Since then, the band have had numerous late night TV appearances, have provided songs for several hit TV shows, including Suburgatory, Degrassi and Girls and have shared the stage with bands such as Mumford and Sons, Walk The Moon and Atlas Genius.  The band released their latest album Goodbye Sunshine, Hello Nighttime last month on Reprise Records and have been enjoying positive reviews of the album.  The writing and recording process for the album helped the band members connect better with each other as friends and as musicians, with the album being described as their most hypnotic and heartfelt to date.  Our staff writer Emily May spoke recently by phone with band member Christina Schroeter and discussed the latest album, the band’s DIY spirit and the Gazzo remix of Hold Me Down.  You can stay up-to-date with the band on their website here, Instagram here, Facebook here and Twitter here.  You can check out their videos on YouTube here and can stream their music on Spotify here and SoundCloud here.  You can purchase the new album from Amazon Music here or iTunes here.  Photo credit: Dominoe Farris.   Check out the video for Hold Me Down, as well as the video for the Gazzo remix, below!

EM: The new Family of The Year album was just released last month. It’s been described as your most hypnotic and heartfelt album to date. What would you say was the inspiration behind the album?

CS: I think maybe it came from…as a band we were having issues communicating. We tried to go up together and work on the album and we ended up taking a break-maybe a couple of months where we just took care of ourselves. We came back with a different attitude. It was just a bit harder for us to see eye to eye on what we wanted to create. When we all finally came back it’s like we were speaking from a more peaceful standpoint but also from a more adult and more thoughtful perspective. I think that might be a little bit of what you’re asking about?

EM: Yeah-I read that the recording of this album helped you connect with each other better as friends and as musicians, that it was kind-of like a turning point.

CS: Yeah, definitely. With our old records we would kind-of just sit around and throw anything at the wall and see whether it was funny or was just kind-of a throw away. This time I think we all had trouble focusing until we finally came back and decided “ok, this is what we want to do”. It kind-of just happened, too. We didn’t really speak about it or think “let’s make a hypnotic album”. That’s just how it turned out.

EM: The four of you did writing retreats to Mount Washington and Bear Valley Springs for the new album. What was it about those locations that you found particularly inspiring?

CS: Mostly that they were just far away…well, Mount Washington, not so much. But Bear Valley Springs was so far removed from LA and it made it easier to try to focus on the record. It was when we were in Bear Valley and were far away from LA and all stuck in a house together-it took 45 minutes just to go to the grocery store-I think that almost contributed to the communication break down between us all. We actually had no space.

EM: You had too much time together?

EM: What prompted the band to perform acoustic sessions in the months leading up to the album’s release?

CS: People seem to like acoustic versions of our songs. I think they are pretty set up for acoustic vibes.

EM: I saw that Latchkey Kids is one of your all’s favorites songs on the album. What would you say it is about that song that really speaks to you as a band?

CS: Melodically, I think it’s really playful-and lyrically. It has a really playful vibe both sonically and lyrically about a subject that can be seen as dark. The song’s about growing up when your parents aren’t around.  Joe sings about how it was so fun that his parents were never around when another way to look at it is “life sucks because my parents weren’t there”. But Joe remembers it as being so free and fun.

EM: The band was completely DIY in the beginning with regards to recording and other aspects of the band. Have you all hung onto any of that DIY spirit? How involved were you with the recording of the new album?

CS: We pretty much record everything ourselves when it comes to demos and basically have a finished idea of a song. We brought a lot of those to our producer Greg Wells and he helped us shape the songs. But I think as far as recording and producing, Joe does a lot of that before we even go to the studio. With that part of the process, he’s still pretty hands on!

EM: What do you think inspires you as a band to continually evolve your sound? Have you had specific ideas in mind ahead of time for your albums or is it based more off what is going on in your lives at the time and inspiring you in that moment?

CS: It all depends on what is happening currently in any one of our minds and feelings. We don’t really approach it like “oh it’s going to be this kind of record”. It’s almost like therapy in a sense where you write this record and afterwards are like “oh weird. The common theme here was sadness or breaking up or whatever” (laughs). You kind-of just don’t realize it until it’s done.

EM: How did the band get involved in The Kickback Sessions by Jam In The Van? What was that experience like?

CS: We did something with them a few years ago and I think they just heard about us releasing a new record and so we just went and did that with them. Everything was great.

EM: What can you tell me about the idea behind the video for Hold Me Down? It has such a cool 70s aesthetic vibe! Did you have an idea of what you wanted the video to look like going into it or was it something you collaborated on with others?

CS: I think for that song we wanted something fun and colorful and we kind-of like to see what the directors come up with. I don’t think we’ve ever collaborated on a video idea because everything we’ve received from directors…it’s just nice to see their vision and watch it play out. Also, none of us are really video people-like we might have an idea for something but it’s more interesting to have an outside idea. We’re big fans of the 60s and 70s, of course, and we just thought it was a cool idea and thought the way it looked was cool. Shooting with Gus was great-he was very laid back. We didn’t spend too much time getting this shot or that shot. We just kind of did it a few times and he was like “yeah, we got it, we got it”. It was fun for us!

EM: You all enlisted the help of New Jersey producer Gazzo to remix your song and give it something special. What prompted you to choose him to do the remix? Had you worked with him before?

CS: We’d never worked with him before. We loved the way he made the song have like a…it sounds, like, French to me. When we all heard it I think we all had the same reaction but it was all separate. None of us were like “oh this is cool” with someone else saying “oh, yes, I agree”. We all just collectively came together and were like “how cool is that”. We were really happy with it. To me it sounds like early 2000s French techno or something- at least from what I know about early 2000s electronic music.  That’s what it reminded me of.  It gave me a lot of energy.

EM: Do you think you’ll do any other remixes of your songs going forward?

CS: I’m sure we will do more remixes. I just love hearing different versions of our songs in a different genre. It’s just interesting to hear what other people would do with our songs.

EM: What’s next for the band? What do you all have coming up?