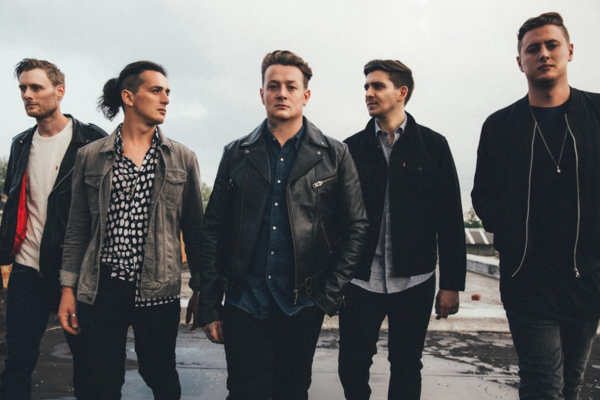 After overcoming some difficult times these past few years and spending nearly two months in the studio, Deaf Havana’s back with a brand new album, All These Countless Nights, and a new outlook on both life and the band’s music. We recently caught up with the UK-based band and they gave us the inside scoop on their new album and tour plans for next year.

You just wrapped some shows with Jimmy Eat World in Germany! How did the shows go and what were the crowds like?

The shows and the crowds were great. Everyone is so nice over here and it’s great to see people enjoying the shows.

Did you play any new songs off of All These Countless Nights and how were they perceived?

Yeah, we played “Sing”, “Trigger”, and “Like a Ghost”. People aren’t quite familiar with the songs yet so the crowd was just watching, but they seem to be enjoying it.

Your new album, All These Countless Nights, is out in January! What can you tell us about it and how long were you in the studio for?

It’s the best album we’ve written by far. It just feels like everything came together more naturally this time. We recorded a lot of it live too, which was a new experience. We spent a long time recording it actually. I think we did two weeks of Pre-Production, ten days tracking at Air Studios in London, a further three weeks at Vale Studios, then some more time at our producers studio. All together, I think it too over two months to record.

When it came to writing and recording this album, did you approach anything differently this time around than you have with your previous albums?

We just tried to play as naturally as possible. We had a lot of time off in between this album and the last one, so it made us all hungry to play music again. It was great to work with Adam (Noble) too, he definitely got the best out of everyone.

You signed to a new label (So Recordings) for this album release, did the change impact the album and the writing/recording process in any way?

No not at all. We have a really good relationship with SO, and they let us be as creative as we like. It’s great because they’re on the same page as us.

It’s been three years since your last album, how do you think you guys have grown/changed since Old Souls was released?

I think we’ve matured as individuals, and all became hungry to play music again. It’s no secret that we all went through a pretty rough time in between these last two albums. I definitely think we’re a stronger band because of the struggle between OS and ATCN, the album also wouldn’t be as strong if we didn’t go through that rough patch.

Being based in London, do you think the city has influenced Deaf Havana and the music you make in any way? If so, how?

Yeah definitely, James [Veck-Gilodi] mentions the city a few times in his lyrics. It’s just so busy and so interesting and easy to get lost in.

You have a very active social media presence on all of the platforms Deaf Havana has accounts on. Since forming, how do you feel social media has impacted the band whether positively or negatively?

I think now, social media is so important. It’s just such a great way of showing the world what the band is up to, and engaging with fans. It’s also a great promotion tool, to promote albums, march and tours.

Yeah, we’re touring the UK in Feb, just after the release of ATCN, then I think we head back to mainland Europe in March. After that, I’m not too sure. Hopefully we’ll get to take ATCN all around the world.

Deaf Havana’s new album, All These Countless Nights, is out 1/27/2017 and is available for pre-order here.