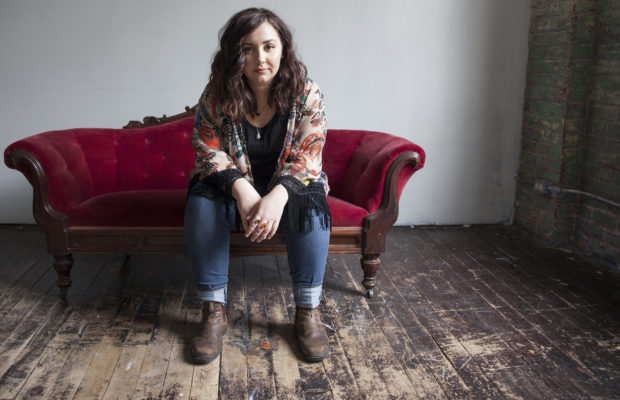 We recently got the opportunity to ask singer-songwriter Gillian Nicola a few questions about her new EP No Place To Call, playing shows, and what she has planned for the future! Be sure to pick up a copy of her EP here!

What first made you decide to pursue a career in music? Was this something that you knew you wanted to do since you were a little kid?
I’ve been singing since I was little – I started taking classical voice lessons when I was 7, so it’s been nonstop since then. I only started writing music when I was about 21 or so though, which is fairly late compared to a lot of other songwriters. Part of this was because what always came out of me naturally was this sort of alt/country sound, and in my teens, I was never comfortable with this. I grew up listening to classic rock – Led Zeppelin, Janis Joplin, etc., so this folky, rootsy sound wasn’t at all for me at first. When I went to university (University of Toronto) I started discovering folk and country music, so I gave it another go and finally I felt like myself.

Your first single “Oh Marie” was released a bit ago, and it is a lovely track. What was the songwriting process for the song like, and what is the track about?
That song was actually written after a really long period of writer’s block. It was part of my mission to “write everyday” (which I’m failing at, ha!) and it kind of just came out of me. Sometimes that happens for me – it comes out of nowhere. Other times it’s a lot more work and it truly is a mix for me of what comes first – sometimes it’s melody, sometimes it’s lyrics, sometimes it’s chord progressions. It’s all over the place! This one was lyrics first – it’s inspired by someone who was basically restarting their life. I think a lot of us think about throwing in the towel sometimes when things get tough, but the character in “Oh Marie” actually does it. It’s both liberating and terrifying.

You’ve also recently put out a new EP, No Place To Call. How would you say this EP differs from previous work that you’ve put out?
It’s definitely a more atmospheric record than what I’ve put out in the past. On this one, I worked very closely with a producer (Dan Hosh) and was very open to his suggestions. In terms of my songwriting, I was much more confident to explore new ways of writing that I hadn’t in the past and as a whole, I was more secure in what I wanted it to sound like. It came out pretty much exactly as I had imagined. The EP is a lot more coherent in my mind than my last EP and the instrumentation is exactly what I wanted. I featured a lot of heavy guitar and guitar effects on it and we added pedal steel to the record as well, which is my favourite instrument on the planet, so I was happy to have that.

And you got the opportunity to work with Dan Hosh – what was that experience like?
Working with Dan was awesome. When I started looking around for studios to record at, he seemed really enthusiastic about the project and had me come in to show me around Catherine North. I was really terrified at first – he and Scott (Peacock, another owner of the studio) had me play some acoustic tunes for them and it was a very vulnerable experience. But I guess I won them over, because after that they were really excited about recording. I met with Dan and my band a couple times in the following months to do some preproduction and fine tune all the songs. Recording is a funny thing, because originally when we met I was very confident about the songs that I was going to put on the EP, but after this preproduction, it changed entirely! We ended up scrapping 4 of the original songs and started over, so the EP turned out telling a different story (a better one) than I had originally planned.

Where do you draw inspirations from while writing music? Do you ever run into ‘writers block’?
Everywhere! A lot of the stories I tell are things I’ve experienced firsthand, but sometimes they are the stories of people I love and care about. Influence comes from everywhere, in my experience. Yes, writers’ block is the worst. I had it for a really long time during a period of releasing my last EP (2013) and putting out this new one. I think it happens for a reason though, so I don’t get down on myself too much when it happens – I think most songwriters go through this.

You’re from Hamilton, which is also quite close to the entertainment hub Toronto – how would you say the local music scenes influenced you? Are there any local artists that you really look up to?
Hamilton has an incredible music scene. I’ve spent my life kind of bouncing around between Hamilton and Toronto and I honestly love both communities so much, but there’s no denying that Hamilton is my home. There’s a sense of community amongst the musicians and the industry here that I think is really unique. Everyone is supportive of one another and very willing to share tips and tricks of how to succeed. It’s great. It’s definitely influenced me because of this kind approach to music – it’s made me less competitive and makes me so proud of where I come from. I look up to a lot of artists in this scene, but the one I have to name for sure is Lori Yates. She’s had an incredible career and has no chip on her shoulder at all. She asked me to open for her awhile back at a show at This Ain’t Hollywood (Hamilton) and when I got there, she had actually listened to my music and genuinely thought it was great. Since then, we’ve played a few shows together and I’m happy to call her a friend. She does so much for music and budding songwriters in Hamilton, so definitely she is someone I look up to.

You also play a lot of shows in the GTA/Southern Ontario. What has been one of your favourite gigs to date? What made it so memorable?
One of my favourite shows, to be honest, are reoccurring parties every summer at my keyboard player’s family’s house in Scugog. It’s a private party that we play every year and it’s SO much fun. But in terms of full blown gigs in professional venues – the latest EP release parties at This Ain’t Hollywood (Hamilton) and The Cameron House (Toronto) were pretty awesome. The band was well rehearsed, the venues were packed, the crowd had a great energy – it was just awesome all around. Also the JUNO Concert Series: The Love Song Edition was pretty awesome too. The JUNOs and Sonic Unyon put together a show with lots of local musicians where we all sang Canadian love songs and were backed by Harlan Pepper. It was such a fun show – the music was great and it was awesome to interact with so many other musicians at once. Plus, playing a show with the JUNOs name on it was pretty cool too.

What is your favourite venue that you’ve played so far, and why?
It’s so hard to say. Sometimes I sing with Toronto funk/soul party band Yasgurs Farm and with them we played The Great Hall in February – that was pretty awesome. But with my own music, I really love playing This Ain’t Hollywood here in Hamilton. Lou (Molinaro, owner) is a great guy to work with on events and the sound there is incredible. The Casbah is awesome too – they’ve done a lot of great tribute nights recently and have been a staple in the scene here for years as well. But Hamilton has a lot of really awesome venues and a lot of promoters that really care about the scene here, so it’s very hard for me to pick just one.

Do you have any plans for a national tour in the near future? Any other plans for the rest of 2016?
World domination! No but actually, I’m gonna play the heck out of this record as much as I can. I can’t say specifically where I’ll be headed yet as things are still in the works, but if you follow me, you’ll find out soon enough! I really want to see this great country, so hopefully the stars will align sooner, rather than later. I’m headed to Nashville this summer as well for a vacation, but hopefully it will turn into a working one too!