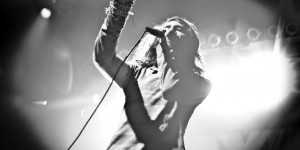 It’s a cold Wensday night, which is rarity in Texas, and several groups of people gather outside of the Houston House of Blues waiting for the doors to open up. A few lucky people in separate line upfront walk in and out of the venue giggling and laughing with excitement about the meet and greet going inside. Finally after I waited outside since five o’ clock (some of the people around me were waiting since 1 0’clock and ever earlier) the door opened and everyone rushed into the House of Blues smiles on their faces, an early sign of a great show.

First on stage was indie rock band The Make. This was the bands first tour, but it sure didn’t seem like, then again, what can you expect from a band made up three of true musicians who have a real passion of music. They started the show off right, but I a lot of people weren’t feeling it like they should have been.

One in awhile in this industry full of electronically made pop being passed off as rock you come across a band that generally rocks. This tour featured two of the best bands that really define “rock” without cheap gimmicks and fake hardcore images. There For Tomorrow and You Me at Six are definitively bands that know how to play music they keep away from over done music style of society and manage to create a rock which is both traditional and original.

There for Tomorrow opened their set with their song Joy Ride, definitively attempting to get the crowd moving, but still a weren’t feeling it. It’s a shame, because There For Tomorrow played one of their best sets I’ve ever seen that night. You Me at Six really failed to do so, but they the lack or crowd participation didn’t  get either bands down, for those of us that actually wanted to see them perform (especially You Me at Six, since it’s a rarity that they perform in United States) they played their heart out and did an amazing job. It’s a shame that so much talent wasn’t being appreciated.

Next on stage was We are the in Crowd. The last time WATIC came to Houston it was at the Warehouse Live in a small room packed with a bunch of kids who wanted to see Allstar Weekend, nobody could move it was really uncomfortable and nobody was singing, this time a lot didn’t. Seriously, I have zero clue what everyone’s, maybe being at show on week day during a school night isn’t for everyone, but I swear it’s really hard to have fun while you and a few other people are the only ones enjoying the show. The band did a wonderful job playing, even if nobody sang in the crowd sang when they wanted them too.

Last was Mayday Parade. Everyone in the room must have taken a big gulp of coffee or something like that this was when the crowd woke up.  I never liked seeing Mayday Parade live, and probably won’t kill myself to see them in future, but oh my gosh if they didn’t give those crazy fans one of the greatest shows of their lives. There was this big ball of energy coming off the band onto the crowd, you could feel how much everyone was loving it. I watched the whole set and even the encore. It was incredible. I think that crowd participation is a big part of what makes a show, all the bands did an excellent job playing, but it really wasn’t a fun show until Mayday Parade’s set everyone was happy.

Overall the show was wonderful, but if you’re planning on going and bringing a few friends educate them and yourself on the other bands playing. You’ll get a way better experience, because all the bands are terrific live and they’d be even more terrific if you and your friends dance and move along.