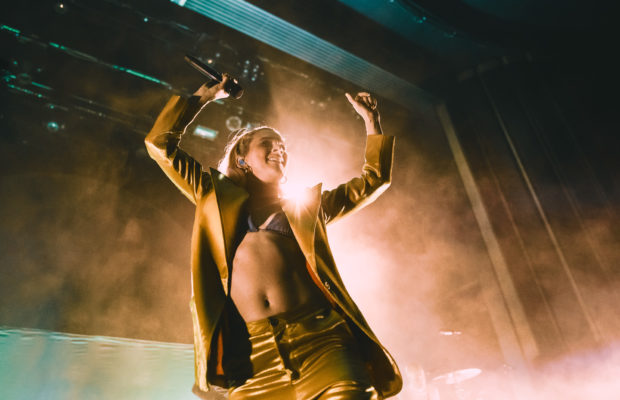 Broods brought their Don’t Feed The Pop Monster tour to Vancouver’s Vogue Theatre this week, in support of their new album of the same name, and almost blew the roof off the venue.

English alt-indie-funk group Bad Sounds opened up the show, with one of the most hyperactive and entertaining sets you could imagine. The quintet clearly have a strong bond, both musically and personally, jumping all over each other as they filled the room with the sounds of their R&B, funk, and hip hop influences. It was refreshing to see a supporting group who put absolutely everything they have into a performance. They seemed to take genuine joy from amping up a room of people who may have never heard of them, and getting them excited for a night of incredible music.

The excitement when Broods finally hit the stage was palpable. The two siblings from small town New Zealand have definitely made their mark and gained a solid fanbase in the 5 years since their first release. Frontwoman Georgia Nott bounced around the stage, connecting with everyone in the front row and beyond, while multi-instrumentalist Caleb Not hung back and provided the guitar and synths that create their iconic sound. Although Don’t Feed The Pop Monster’s sound is less synth-pop and more pop-pop than their previous releases, the Nott siblings are able to seamlessly intertwine their old hits with the newer ones. The duo also included some of their slower songs in the mix as well, allowing the audience to catch their breath from dancing, while also creating a dynamic show that allowed them to showcase their range as artists, both in style and musical ability. In addition to vocals, each sibling played at least two instruments each throughout the show.

Because of the balance of old and new throughout the show, it was extremely accessible for fans of both Broods’ past and present music, creating a true dance party of a show that had everyone sweaty and joyful by the end of it.