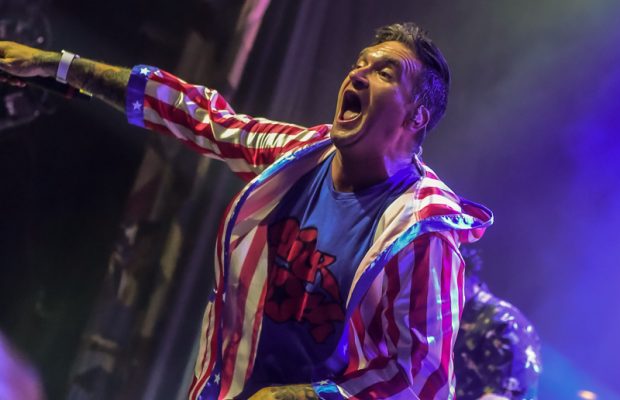 What started out as a really small crowd for the main room of the Houston House of Blues quickly turned into a packed house. The From Your Screen To Your Hometown tour was the most fun you could have had this summer. For the small crowd that got there early, they were blessed. I honestly feel sorry for anyone who missed opening band Doll Skin. Doll Skin, who just released their latest album Love is Dead and We Killed Her are so much fun to see perform live. The Arizona based band really knows how to use the stage. I couldn’t look away during the seven-song set. At one point lead vocalist, Sydney Dolezal leaped over the barricade to perform a breakdown in the center of the crowd before running back on stage not missing a note. They closed out their performance with a song everyone needs to hear called “Puncha Nazi”, in less than two minutes that track gets the point across. Before leaving the stage a breathy Dolezal made one final statement “Every single ICE Officer is a bastard”. I’ve never been pumped to see a band perform again and I couldn’t imagine missing them.

Following Doll Skin was The Early November. The Early November had always been a bucket list band for me. I was too young to see them before their hiatus and I had seen lead singer Ace Ender performers under his other projects like I Can Make a Mess Like Nobody’s Business. Ender’s confessed on stage after opening with “Narrow Mouth” that they never really come to Houston, which explains how bummed I was every time there was a tour announcement. Ender’s gave a little speech about his relationship with pop-punk and New Found Glory that a found really nice. A reoccurring them of the night was really being respectful of the opening acts and the New Found Glory for bringing them on stage. As it should be really. It was touring member of Nate Sander’s last night of the tour and he got a nice send-off by the band. They played my favorite song “I Want to Hear You Sad” and closed out with “Ever So Sweet” a nice change of pace. They ended with the promise of returning with their new album.

Real Friends took the stage next. Real Friends is a band much like the Early November that I’ve followed for a long time, but have never seen them live. I was over my Warped Tour days and I had like bills to pay when they started coming up. It was hard for me to get out to shows. I am happy that I’ve finally seen them play. The opened up with “Mess”. One thing I found funny about their set was the brazened way they negged the crowd. By this time the House of Blues was almost wall to wall full and they were determined to get the audience pumped. Telling the crowd to wake the fuck up every few songs. Crowd surfers almost took me out while shooting. As it should be really. Most of the setlist was composed of music from their latest album “Composure” (yes I did that on purpose because I am a fun writer). The Chicago boys continued the theme of gratitude and thankfulness when they took the time to tell people to respect opening bands. This is a push I’ve been seeing lately by several people and I am really happy about that. They ended their set with “From Outside” and then it was time for the stage to get transformed for the headliners.

I had seen New Found Glory once before opening for the Honda Civic Tour in the Woodlands, TX. I was really excited about this tour because I was such a big fan of their From The Screen to Your Stereo albums growing up. As a movie lover and pop-punk kid, they were the best thing to ever happen. I was really excited to hear all these covers live along with their other music. The stage was an eye-catching recreation of the cover of From The Screen to Your Stereo 3. I was fully aware that we were in for a dramatic performance, but I didn’t know how dramatic it was going to be. The lights dimmed on stage as Smash Mouth’s “All-Star” blared from the speakers with the whole crowd singing along. Cut to the classic 20th Century Fox (R.I.P now Disney owns our everything) theme music. The band takes the stage and soon emerges vocalist Jordan Pundik on stage in American flag boxing gear to perform “Eye of the Tiger”. It was everything I could ever dream of. This was not the only costume change that happened took place. Everyone’s favorite was the Princess Elsa costume that he looked beautiful in during “Let it Go”. They did a really good job at blending the cover in with what a typical setlist. This show was so much fun with lots of movie sound bites being played before songs and a moment where they throw out popcorn to the crowd. It was really awesome to discover that Yellowcard’s Ryan Key was now touring with the band. They delivered on the tour titled promise of bringing From The Screen to our town. I know that this tour was coming to the end but I really hope that New Found Glory keeps bringing these cool theatrical performance with them in the future.