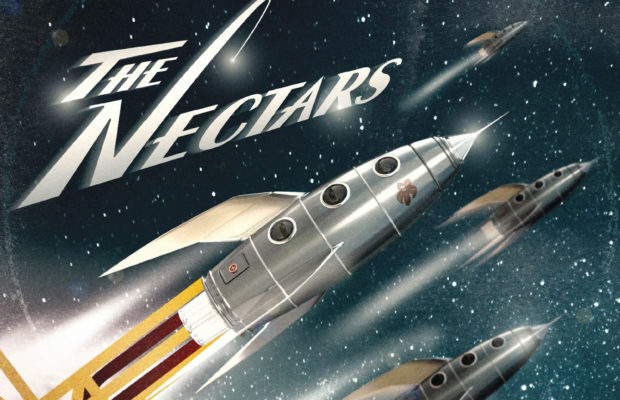 Alternative rock has been seeing many a band that push the envelope and make their own distinct sound nowadays. With their debut album Sci-Fi Television, New Jersey outfit The Nectars (lead vocalist Jess Kenny, guitarist Mike Baron, bassist Jon Paul, and drummer Mike Montalbano) have joined this much-needed movement, offering a smorgasbord of catchy alternative, aggressive punk and, put simply, some downright good vibes that any rock fan is sure to enjoy.

With the opening track “Holy” clocking in at just over 1 minute, Kenny’s vocals soar over the garage punk-centric song, and the gritty instrumental from the band backing her make for an introduction that reels listeners in for a very fun ride.

The following track “Heaven” is similarly aggressive; with Paul’s driving opening bassline, solid drumming from Montalbano and Baron’s warm, biting guitar tones, this track lays it all out there, giving a full scope of the unique flavor of rock The Nectars are bringing to the table; and it’s a great one.

“Cemetery Girl” captures the catchier, anthemic side of garage rock, with a chorus that’s sure to have audiences singing along. The guitar work really shines on tracks like the summer vibes of “We Will Run” and the headbanger’s jam “Don’t Panic”, and the skillful rhythm section of Paul and Montalbano comes to the forefront on the pop rock jam “Lights Off” as well as the driving beats behind “Tame”. Kenny’s shimmering vocals create a really cool environment on these tracks, and calls back to old-fashioned punk singing on tracks like “I Want It”; her ability to change between these on a dime is certainly a highlight of the record.

Sci-Fi Television ends as fast-paced as it began, with the heavily-relatable night owl’s anthem of “Tired” making for a great conclusion to a great 9-track listen. With this only being their debut album, The Nectars have made it clear that rumors of rock’s demise have been greatly exaggerated; this is a record for rock fans of any sort, and a very exciting omen for where The Nectars’ career is going next.