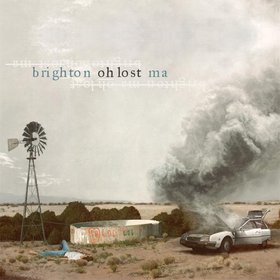 Forming back in 2006, the indie-rock band Brighton MA is gearing up to release their sophomore album Oh Lost on April 2nd via Fast Plastic Records. Sharing stages with acts like Spoon and Arcade Fire, Brighton MA’s music has been featured on popular shows such as Gossip Girl, Community and One Tree Hill. More recently, they were a part of this year’s South By South West festival.

Opening up Oh Lost with the track “Bulletproof”, singer Matt Kerstein’s vocal style greatly resembles The Walkmen’s Hamiltion Leithauser – a band Brighton MA has been compared to in the past. As the perfect opening song to the new record, listeners are able to automatically feel what this band is all about. Brighton MA’s music style may resemble many others in the indie-rock genre, but the craftsmanship and structure of every song doesn’t go unnoticed.

Especially in times such as these, it is very easy for indie-rock acts to get clumped together in the same group of artists that sound exactly the same. But as Brighton MA shows in the third song off of Oh Lost, “Touch” is a platform that shows their honest lyrics. Brighton MA is an act that understands how important it is to preach honest lyrics to their listeners as a way to form a relationship with them. As an ode to an age group of people growing up and maturing, this track is perfect for the target audience looking for a track dedicated to looking at the past and feeling carefree – sharing lyrics like “kids like us trying to live off the touch” and a guitar tune that is filled with a melody of sheer nostalgia.

In the eighth slot of Oh Lost, listeners will find the perfect folk love song, “Good Kind of Crazy” that showcases Brighton MA’s versatility. They are able to not only create hard hitting rock songs and tunes full of indie soul, but they are able to use a mixture of acoustic guitars and horns to create a low key track that any listener of this music genre will love – the faint sound of organs in the background resembling a track you would find on Wilco’s “Yankee Hotel Foxtrot”. As a track that was used last year as a part of an international TV and web campaign for Jack Daniels, it is clear that “Good Kind of Crazy” is easily one of the more popular and well composed songs on Oh Lost.

The album closes with “Wake The Dead”, an eery tune that is the perfect ending to Oh Lost. With the taunting drums, the mysterious guitar parts and the smooth vocal harmonies, the cohesiveness of this track is different from many other indie-rock acts. The eleven track album, however, is anything but ordinary. As the perfect sophomore album for these Chicago natives, expect to see them on the road this year and march your calenders on April 2nd – Oh Lost is one album you aren’t going to want to miss.