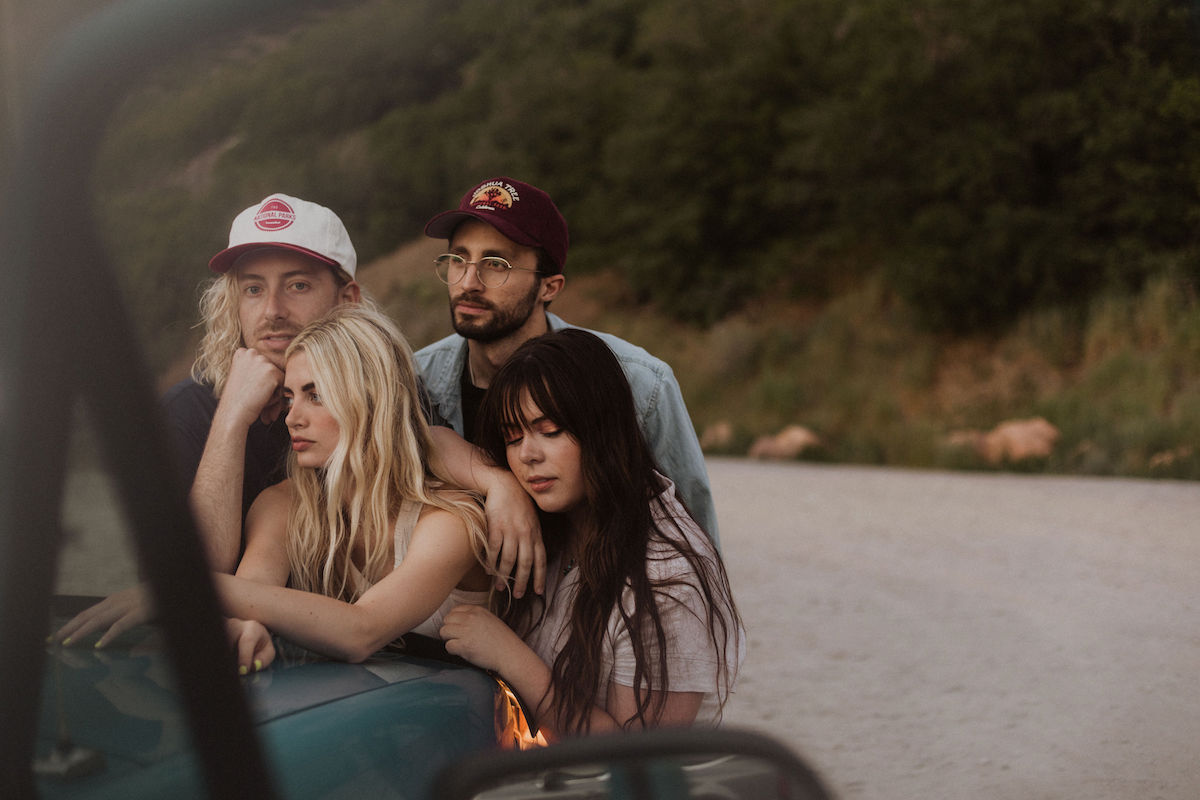 In 2013, folk-influenced indie pop band The National Parks, comprised of Brady Parks [guitar, vocals], Sydney Macfarlane [keys, vocals], Cam Brannelly [drums] and Megan Parks [violin], released their debut album Young and have cultivated a loyal following of fans over the years.  Based in Provo, Utah, the 4-piece band has grown into an indie phenomenon and cultivated their sound as a band, which has roots embedded in blissful pop, cinematic electronics, organic orchestration, and rock energy.  They have garnered over 150 million total streams, sold out headlining shows across the country, have toured with artists such as Andy Grammer, Peter Bjorn and John and WILD, and have performed at various festivals across the country.  Their fourth full-length album, Wildflower, elevated the band to the next level and led to The Wildflower Podcast.  Although in the past, the band tried to anticipate what record labels or radio programmers wanted out of an indie-folk band, chasing a pop sound and trying to be more accessible and radio friendly, with Wildflower they decided to go back to their roots and make the music they wanted to make and not worry so much about trying to make music according to what others might want their sound to be.

The band recently released their latest album A Mix For The End Of The World- Part 1, which continues to showcase the band’s sonic evolution and Brady’s deep and heartfelt songwriting.  “We are so excited to have our new album out in the world!” shares lead vocalist/guitarist Brady Parks. “This album is inspired by the times we are living in. The challenges can be overwhelming and all-consuming and it’s easy to feel lost and alone in all of it. This album is about finding joy in the moments of life with the people we love and seeing that through theups and downs, life is good.”  This year also saw the band curate the first year of their new music festival, Superbloom, which was held in southern Utah near Zion National Park.  The festival featured The National Parks headlining and performances from Yoke Lore, Joseph, Joshua James, Ellee Duke, Brother., and Arbour Season.  With plans to tour more and write and release new music, make sure to connect with The National Parks via the links below to stay up-to-date with the band.  Photo credit: McKenna Chatterley.

What can you tell me about meeting and forming The National Parks?  What were the early days of the band like?

Brady: I started playing open mics in Provo, UT at our home venue Velour. I’ve always been obsessed with songwriting and every week I would go and test out the new songs I had written. Little by little, I became involved in the music scene and met Sydney and Megan and Cam through mutual friends and the music scene. The early days were filled with writing, recording, playing shows and the beginning of touring. Before we even had music released, we went on tour outside of Utah and even though we only played for friends, family and bar employees we got a glimpse of what life would be like if we pursued this dream.

You all have a lot of love for Utah and take a lot of pride in being a Utah band.  What do you love about being from Utah and what is the music scene like?

Brady: We really do love Utah. We are really inspired by nature and Utah is surrounded by national parks and incredible landscapes. Along with that, Utah has an amazing music scene. We started in Provo, which is home to BYU and UVU, which each have over 30,000 students. It’s an energetic college town and is a melting pot of talent. We’re grateful to have started out in a community that is so supportive of local bands with so many opportunities for new bands to grow and play with other local bands. It’s a rad scene and we love it.

With the success of your debut album ‘Young’ in 2013, you were asked to score and write music for The National Park Experience, a film project aimed at sharing stories of diverse visitors to the parks.  What can you tell me about that opportunity and writing “As We Ran” for the film Love In The Tetons?

Brady: The opportunity to write for NPX came at an amazing time for the band. We were brand new and being able to be a part of a project like that was so cool for us. As I sat down to write the song, I was thinking about my own life and what I would tell my future kids about their future mother. With that and the story of the film in my mind, the song started flowing out of me. It was a great process to see it all come together and to see how it was used in such a beautiful film. Since we released it, “As We Ran” has become our biggest song on Spotify and we absolutely love playing it live to this day.

Although you write most of the songs, in what ways do you collaborate together as a band to create the final versions of your songs?

Brady: I usually start writing the song on guitar and as it comes together I’ll either produce a demo at our home studio to work through ideas or I’ll just record a simple voice memo to send to the band. Once I send the song over, everyone will start brainstorming and working out ideas for their parts. Then we’ll bring it to the studio and work with our producer to bring all the ideas together. The recording process becomes very collaborative.

You have said that in the past you have played the game of trying to anticipate what record labels or radio programmers want out of an indie-folk band, chasing a pop sound and trying to be more accessible and radio friendly.  With last year’s album Wildflower, none of that mattered to you and you didn’t care about chasing trends anymore.  What has your journey been like in finding your sound as a band and being true to yourselves?

Brady: Creating Wildflower and our newest album A Mix for the End of the World – Part 1 was a very liberating process. We’ve played the game of guessing what the industry would want from us in the past and then we came to the realization that we love creating music and we wanted to go back to making the music that we wanted to make for the love of it. Our journey has been a wild ride and it’s been amazing to keep finding ourselves and to keep making music that feels authentic to us.

What kinds of challenges did you face during the covid shutdowns and what has it been like to adapt to more of a social media presence in order to reach your fans digitally?

Brady: We released Wildflower right in the middle of the pandemic in 2020. It was a weird time to release an album and we couldn’t imagine not being able to tour it and play it live for our fans. We did some livestream shows but when states started opening up to groups of 50 people we decided to go on tour in a different way. We came up with the “Campfire Tour” and toured around and played over 50 shows in an intimate acoustic setting outside around a campfire. It was such a special tour for us because we got to connect with people at a time when lockdowns were keeping everyone away from each other.

You most recently released your new album ‘A Mix For The End of The World – Part 1’, which is inspired by the times we live in.  What can you tell me about the album and its message, as well as your decision to release the album in 2 parts? How have you tried to navigate the times we live in right now and what brings you joy?  What do you hope people take away from the album?

Brady: A Mix for the End of the World – Part 1 was written during the pandemic. It’s easy for me to get really caught up in podcasts and the chaos and uncertainty of the time we are living in. When I feel overwhelmed, that is usually when I take a step back and look at my life and focus on the things that matter most. I hope people that listen can feel like they are not alone in this crazy time and that they can be reminded that there is so much joy to be found in the simple moments with the people we love.

You wrote 40 songs in preparing to go into the studio for your last album, ’Wildflower’, whereas in the past you would write almost the exact number of songs that you’d take to the studio, which is what would go on the album.  What was your approach to the songwriting process for the new album?

Brady: I didn’t want to overthink the process for this album. I just wanted to write as much as I could. I ended up writing about 15-20 songs and we ended up with 8 on Part 1 of the new album. We felt like we had the songs we wanted to record but we also felt that it was only one part of the full story. We’re excited to release Part 2 in 2022 and complete the story of the album.

What do you feel makes this new album more authentically you than you’ve ever before and what can you tell me about the recording process and taking your time with it?

Brady: This album feels so authentic to us because we made the music that we wanted to make. We didn’t overthink the process, we just went with what felt right to us. When we were in the studio we just let the songs lead the way and it was a really fun process to create like that.

Having grown up and evolved as a band together, what have you learned about yourselves and each other over the years?  How has your vision for the band changed?

Brady: When we started the band we were just kids in college with pretty much no idea what we were doing. Since then, we have played countless shows, traveled the world together and have been through so many ups and downs together. We are a family now and it’s so great to have that kind of relationship and trust with each other.  We know that we can get through hard times together and that we all have shared goals.

You recently played your rescheduled one-day Superbloom Festival, outside of Zion National Park, following the release of your new album!  What inspired the idea to curate your own festival and what can you tell me about the festival?  What was the response to this first year?

Brady: We have always dreamed about creating our own music festival in Southern Utah by Zion National Park. After postponing 2 times we were finally able to make it happen and it was an amazing experience. We had an incredible lineup and we are already planning next year’s Superbloom!

Brady: We have a lot of plans in the works as a band and are currently working on new tours, new music and staying crazy busy. Plus, Meg and I are having a little baby boy in March so that is definitely going to be an adventure and we are so stoked!