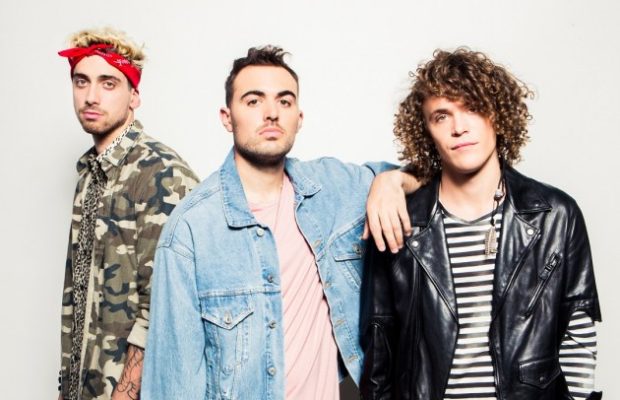 For those that don’t know, how did Cheat Codes get together and form?

We all met in LA and came from different musical backgrounds. Kevi used to rap, Matt was in various rock and pop bands, and Trevor was in an acoustic project called Plug In Stereo. We all felt there were too many limitations in the genres we did before so we wanted to start a project where we could have ultimate flexibility, whether we singing on the track, having a featured vocalist, a rapper, or even collab on the production itself, we can kind of go any direction we want! That was the original idea with this project!

You guys just dropped your new song “Queen Elizabeth”! What was the overall writing and recording process like for the track?

It went pretty quickly honestly! We love songs that have solid visual concepts so we thought it would be cool to have a song about the girl next door, but give it that visual of the actual Queen Elizabeth, since she’s such an OG. We have our own home studio so we did all the production and recording there!

You just wrapped a US tour and recently played a few festival dates. What can fans expect from a Cheat Codes live show and is there anything about your live performance that you think makes Cheat Codes stands out from other artists in the genre?

A Cheat Codes show is unlike any other EDM show you’re going to see. We all come from live performance backgrounds and we all sing;  so we’re the perfect hybrid of the two. We’re constantly getting the crowd hyped, singing our own songs, and we love to mix all sorts of genres into our set. Its a really good set for anyone that loves music in general and wants to have a good time!

Have you been working on music for an upcoming EP/full length album to be released in the future? If so, what has the writing and recording process been like and what can fans expect from the upcoming collection of songs?

Yeah we’re working on an EP now! As far as the writing and recording process goes, we tend to carry the same philosophy throughout all of our songs – make a ton of music and pick the best ones to release haha. Generally we start with vocals first, writing over piano or guitar chords. If we can make a really good song with zero production and it stands on its own, then we know its going to be good with all the bells and whistles added.

Do you have any tours/festival dates lined up for next year?

Yes we have some big ones coming up! We’ll be announcing those soon! We’re also playing Z festival in Brazil on December 10th with Demi Lovato;  so that should be fun!

You have a very active presence on the band’s social media platforms. Whether positively or negatively, how do you feel social media has impacted Cheat Codes?

To us, social media is all about the fans. It’s the most direct line of communication with them. We choose to use it as a gauge to get feed back from our core audience. It’s pretty much all positive, we have great fans! We don’t really take social media too seriously, I think its meant to be fun at the end of the day. If people can see you’re having fun than they’re gonna have fun.

You can stream their new song “Queen Elizabeth” here.