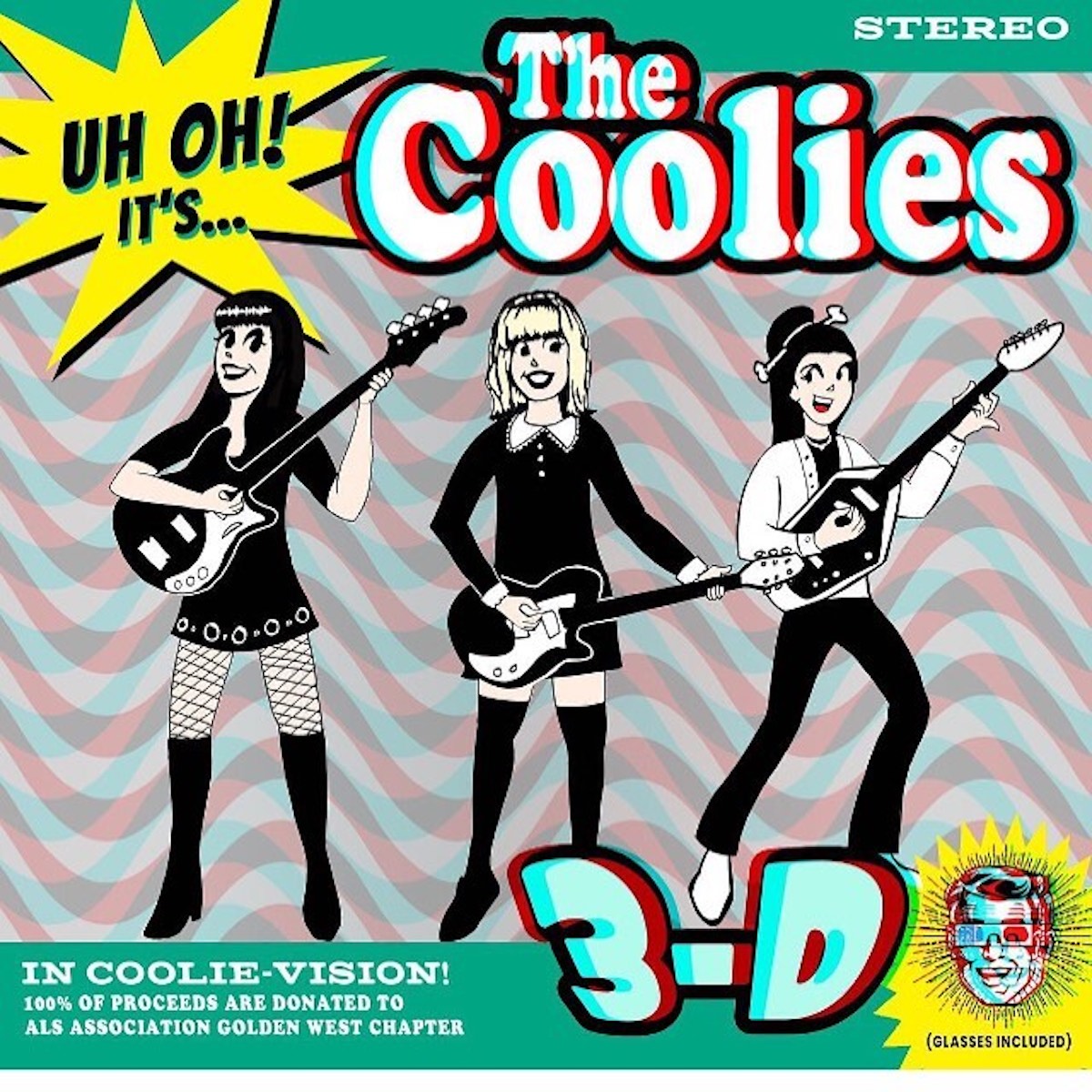 The Coolies, which combined the late Kim Shattuck (frontwoman of The Muffs and longtime bassist of The Pandoras) with Melanie Vammen (also of The Pandoras and formerly of The Muffs) and Palmyra Delran (solo artist and The Friggs guitarist), raised over $15,000 for ALS research after selling out three pressings of their debut EP, Uh Oh! It’s… The Coolies (You can order the digital record HERE).  Kim, known throughout the pop-punk community for her fierce creative spirit, passed away on October 2 due to complications from ALS.  Following her diagnosis, The Coolies became Kim’s passion project and provided a creative outlet for her.  Without disclosing that she was suffering from ALS, Kim continued to answer interview questions about The Coolies’ project and remained committed to spreading awareness about disease up until the end.  Continuing to raise awareness about the disease brought her an immense amount of happiness during a time when she was fighting her own personal battle.  The six-song EP was created using demos that were some of Kim’s last recordings, all written by her in her signature sarcastic yet jubilant tone, with Melanie co-writing “Ignoramus” and Palmyra collaborating with her to pen “Blueberry Crumble.” Working off the demos, Kim and Melanie added to the tracks in West Coast studios, while Palmyra recorded her parts on the East Coast at Little Steven Van Zandt’s Renegade Studios NYC.  Generously backed by Little Steven Van Zandt and his label Wicked Cool Records, 100% of the proceeds from record sales were donated to The ALS Association Golden West Chapter, whose mission is to discover treatments and a cure for ALS, and to serve, advocate for, and empower people affected by ALS to live their lives to the fullest.

“We love working with Little Steven and all the people at Wicked Cool Records on The Coolies.  They were supportive and encouraging from the first day we began the project and continue to be today.  There was no hesitation with our wish to donate 100% of the proceeds to the ALS Association in Kim’s name.  The recording was such an important and emotional collaboration between the three of us. Working on Kim’s demos as the foundation for the record, and writing a few new songs together was as fun as it was bittersweet. Kim was on a mission to create a solid foundation for The Coolies – a band we only joked about forming for years…all the while, battling ALS.  The three of us are so proud to have created such a special record and promised Kim to keep her music alive through touring and more recordings.  We are grateful to Little Steven, the Wicked Cool Records family and Press Here for backing and encouraging us.”

Kim Shattuck and Melanie Vammen played together in Hollywood garage rock staples The Pandoras from the mid-’80s to 1990.  Soon after, they formed another L.A.-based band, The Muffs, releasing their self-titled debut album on Warner Brothers in 1993.  As noted critic Jim DeRogatis wrote, “You’d have to reach all the way back to Blondie’s Plastic Letters to find punkish power pop this endearing.”  It was on a Pandoras tour in 1986 that Kim and Melanie first met New Jersey native Palmyra Delran.  Palmyra went on to play guitar in girl punk band The Friggs for the duration of the 1990s, opening shows for legends like Ramones and Cheap Trick.  When she’s not writing, recording, or touring, Delran brings the rock to the people as host of Palmyra’s Trash-Pop Shindig in Little Steven’s Underground Garage channel on SiriusXM and delivers a rebellious range of sweet surf sounds, rambunctious rock n’ roll and everything in between

Our mission is to discover treatments and cures for ALS, and to serve, advocate for, and empower people affected by ALS to live their lives to the fullest.  Our vision is to create a world without ALS. The Golden West Chapter serves people with ALS and their families in 31 counties throughout California and in the state of Hawaii.  For more information about The ALS Association Golden West Chapter, please visit us at www.alsagoldenwest.org or email us at [email protected]