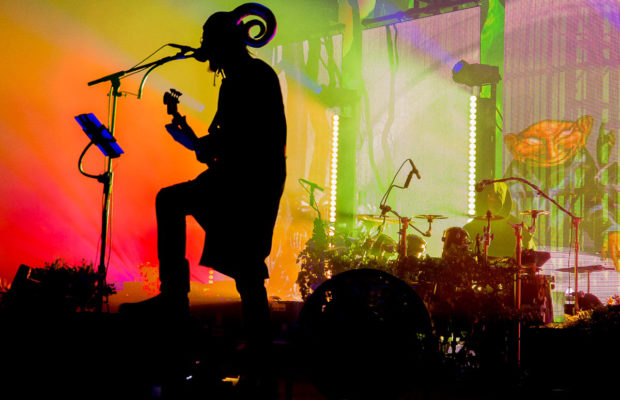 Legendary and iconic rock band Primus, who is currently on tour in support of their latest album The Desaturating Seven, performed recently in Louisville, Ky to a packed house.  The Louisville Palace, a historic old theater in the heart of downtown Louisville, was the perfect setting for the show.  Having formed as a band over 30 years ago, Primus has gained a loyal and passionate fan base.  The crowd was buzzing with excitement as they waited for the band to take the stage, exploding in cheers and applause when that time finally arrived.  The band performed two sets, the first being a set of older, classic songs, ending the set with their hits My Name Is Mud and Jerry Was A Race Car Driver.  After a brief intermission the band came back out, with Les Claypool wearing a Goblin-themed costume, and performed their new album in it’s entirety, followed by a few more older songs.  Throughout their set, beautiful lighting illuminated the stage and there were screens along the back of the stage showing videos and colorful images, adding to the ambiance of the evening.  Primus is an incredible band and they put on a wonderful show for their fans.