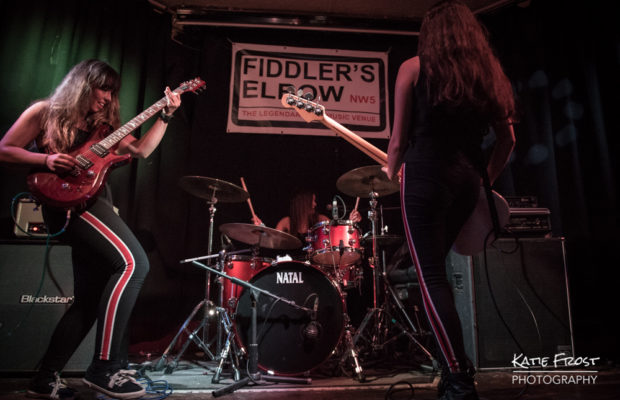 Aussie rock ‘n’ roll trio Tequila Mockingbyrd returned to London for the final show of their “Seaside-To-City” UK tour (for which the band produced their very own rock, which is also available via their merch store). It was another ridiculously hot day in London so I was glad to get out of the sun and into the legendary live music pub The Fiddlers Elbow. This was my first time at the 150-capacity venue and I instantly loved it; great stage area and walls adorned with old vinyl records.

First to take to the stage were “balls out riff rock” trio Dig Lazarus. The band opened their set with “White Ryno” and “Hands Off” from most recent EP Outlaw (2017) and were full of energy from the very start. Guitarist Ashley and bassist Atticus had great chemistry together; moving and grooving around every inch of the relatively small stage. Drummer Jack also put 110% into the performance and all three were a joy to watch. I really enjoyed their set, which not only featured tracks from Outlaw, but also their debut EP Satisfied (2014), together with a couple of new tracks. The band also treated the crowd to a cover of “Jumping Jack Flash” by The Rolling Stones, which more than did the original justice, and went down really well with the steadily-growing crowd.

Next up were rock’n’roll four-piece The Garage Flowers who describe their music as “drunken guitar pop”, which I would say is fairly accurate, though I also got an indie vibe from their sound. These guys had a definite classic rock flavour to their appearance, as well as great stage presence. The band opened their set with their latest single “Crashing The Party” which really set the tone for their performance, and was very well-received by the crowd. The band went on to play a short but sweet six-track set featuring “Miss Maggie May”, “Hello Tango” and “Nothing’s Gonna Get Me Down Today”. I really enjoyed their sound as well as the energy of their performance and would definitely go see them again.

Third on the bill tonight were Suffolk hard rockers Renegade Twelve who brought a more metal flavour to the evening’s proceedings, which was alright by me as that is the genre of music I am most into these days. All five of the band members looked like they were thoroughly enjoying themselves throughout their set, which was unapologetically up-beat and groovy. Insane guitar solos from Dan and Jacob mixed perfectly with front-man Sam’s insanely brilliant vocals, while Josh grooved away on the bass (in a Hawaiian shirt) and Joe kept everyone together with his drum skills. The band say their sound is influenced by bands like Pantera and Iron Maiden, and that was definitely evident in their set. Whilst the majority of the tracks played came from their self-titled debut album (released last year), Renegade Twelve also played a few new tracks, including “No. 12” which was one of my personal favourites from their set.

As the clock struck 10pm tonight’s headliners Tequila Mockingbyrd took to the stage. By this time the venue was packed and everyone was have a wonderful time. The girls played an excellent set featuring tracks from their 2017 debut album Fight and Flight including “Money Tree”, “Never Go Home” and “Tell Me”, as well as their latest single “Enjoy The Ride” (released last month). Drummer Josie introduced the track by saying it was about carrying on in the face of adversity, as the girls had to do when their van was robbed in Spain back in May, which meant they lost everything from amps to guitars and half a drum kit. She thanked the fans for contributing what they could to their fund to replace the gear and allowing them to carry on doing what they do best – playing straight-up, high-energy rock’n’roll! The last time I saw Tequila Mockingbyrd live back in March last year they had a slightly different line-up. The current T-Byrds consist of guitarist and lead vocalist Louisa, and bassist Jacinta, together with original member Josie on drums. Each of the girls put their all into their performance, and were an absolute joy to watch.

Tequila Mockingbyrd will return to the UK in September supporting The Treatment and Airrace. Head to their website for all the details.