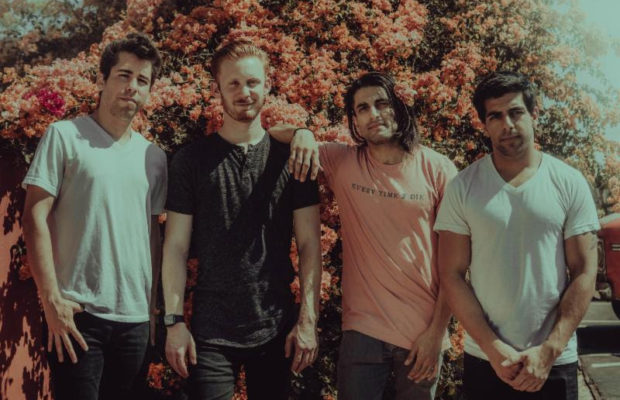 Offering a fusion of rock with post hardcore and punk influences, Takers Leavers are carving their own path with powerful lyrics and impactful storylines. The name stems from the novel Ishmael by Daniel Quinn, simplifying the concept of society/human behavior and its impact on its surroundings. Forming in 2016, the Costa Mesa, CA quintet consists of David Baqi (vocals/guitar), Karem Idrees (bass/vocals), Robby Friend (guitar), and John Gee (drums). With a deep history of playing together in varying bands and touring, the members came together to find a creative outlet. Takers Leavers launched as an avenue to find unity in an aspect of life that prides itself on individuality.
Today they are thrilled to announce their brand new EP Break & Bloom, due out 9/7! The EP was engineered/produced/mixed by Adam Sisco at Twin Star Studios and mastered by Paul Leavitt. Off the forthcoming EP comes the single “Fist to Wall,” an emotionally-driven track about loss and letting go. The track details a desperate attempt to regain what one has lost, no matter the cost. The music video was shot/directed by Justin Bernardez and edited by Jesse Leon, and can be viewed below. Lead vocalist/guitarist, David Baqi had this to say about the track:
“‘Fist to Wall’ – This was the first song we wrote together for this EP. It is heavily inspired by the popular anime, Fullmetal Alchemist. From themes including: letting go, taboo, coping with loss/anger, and facing consequences, “Fist to Wall” is a desperate attempt to regain what one has lost, no matter the cost. A very important theme in Fullmetal is the idea of “equivalent exchange”, to gain something, you must first sacrifice something. In desperate times, we are pushed to great extremes, even practicing techniques that we know are harmful. The line “don’t look for answers in all of the wrong places” summarizes this pretty well.”
Influenced by acts like Circa Survive, Every Time I Die, and Thrice, Takers Leavers offer a dynamic sound that dives into lyrical content that is both melancholy and hopeful on a relatable level. Lyrically, the band finds inspiration from personal trials of loss, love, ache, anger, and other related emotions to bring the conversation of mental health out from the shadows.
Upcoming Shows
8/6 The Wayfarer (Costa Mesa, CA)
8/13 The Wayfarer (Costa Mesa, CA)
8/20 The Wayfarer (Costa Mesa, CA)
8/22 Slidebar (Fullerton, CA)
8/25 waiting on location (San Diego, CA)
8/27 The Wayfarer (Costa Mesa, CA)
8/29 Molly Malone’s (Los Angeles, CA)